JAKARTA (The Jakarta Post/ANN): Indonesian telecommunications firms are expected to reap long-term benefits from the coronavirus health crisis due to increasing demand for mobile data and internet connectivity, say analysts.

Anissa said this shift could create a lasting impact for the country’s telcos, as indicated in their financial performances in the first nine months of the year.

“Telcos’ financial performances have remained stable amid the pandemic, compared to companies in other sectors that experienced significant [financial] decline, ” she told The Jakarta Post by text message.

In September, publicly listed PT XL Axiata recorded a 5.1 per cent increase in annual revenue to Rp 19.66 trillion (US$1.4 billion), while its profit skyrocketed 316.3 per cent year-on-year (yoy) to Rp 2.08 trillion following the sales of 2,782 telecommunications towers earlier this year.

“Most of our customers were working and studying [from home] during the pandemic in accordance with the government advisory, ” he said during a media briefing on Oct. 6.

According to the e-Conomy SEA 2020 report by Google, Singaporean state-owned investor Temasek Holdings and global consultancy Bain & Co, Indonesians spent 4.7 hours per day on the internet during the height of lockdowns, up from 3.6 hours before the outbreak. The figure now stands at 4.3 hours per day.

The report also noted that eight out of 10 internet users in Southeast Asia viewed technology as “very helpful” during the Covid-19 outbreak, and that it has become an “indispensable part of people’s daily lives”.

Publicly listed telecommunications company PT Indosat, which owns the brand Indosat Ooredoo, also enjoyed an increase in its September revenue of 12.9 per cent yoy from its cellular service.

Overall, the company saw a 9.2 per cent yoy jump in overall revenue to Rp 20.59 trillion in the first nine months of the year.

The company, however, failed to reduce its losses in September, which worsened 60.8 percent yoy to Rp 457.5 billion, from Rp 284.6 billion last year.

“Almost every operator has rolled out unlimited data plans that could lead to yet another price war, and it could get even tighter if the Covid-19 outbreak worsens, ” she said.

Anissa of Reliance Sekuritas, however, said she was not too concerned about this possibility, as the recently enacted Omnibus Law on Job Creation would prevent a price war.

The law stipulates that the government set the price floor and ceiling for network service providers in the public interest and to promote healthy business competition.

In the case of a price war, said analyst Maximilanus Nico Demus of Pilarmas Investindo Sekuritas, each telco would still retain its customers regardless of the pricing scheme.

“As long as they continue to improve the quality and services of their [mobile] data connectivity, each provider will maintain its market share, ” said Maximilanus.

He added that telcos were likely to continue to benefit even post-coronavirus, as the health crisis had turned mobile data into a primary need for many people.

“People will still continue to buy mobile data despite the fact that the pandemic has weakened their buying power, and this will continue even in the post-pandemic world, ” he said. - The Jakarta Post/Asia News Network 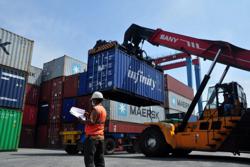