According to the Tracking Indices for the Global Economic Recovery, an index designed to measure global economic recovery by the think tank Brookings Institution and Financial Times, Asia’s fourth-largest economy posted minus 0.76.

Korea saw its TIGER index plunge to minus 5.93 in June in the midst of the COVID-19 pandemic, the sharpest drop since 2009 with minus 6.23. However, the index climbed by 3.17 points to reach minus 2.76 in July, continuing the uptrend until August.

Experts forecast the local economy to go through a “K-shaped” recovery. A K-shaped recovery refers to a response to an economic slowdown in which some industries and individuals recover while others continue to decline.

“The economic recovery across countries will move at different paces due to a growing divergence in fiscal health and quarantine capabilities amid the prolonged pandemic, ” said Lee Sang-won, the KCIF’s deputy general manager.

“Emerging markets, including South Korea, China and Taiwan boasting moderate sovereign credit ratings and health care systems as well as some European states with stable fiscal space and industrial power like Germany will probably show faster recovery than others.”

In the July-September period, the country’s real gross domestic product gained 1.9 percent from the previous quarter, when it saw a negative growth of 3.2 percent, thanks to robust growth in exports, according to data from the Bank of Korea. The third-quarter reading marked the fastest growth since the first quarter of 2010, showing signs of recovery from the protracted COVID-19 crisis.

But growing fears of a coronavirus resurgence due to the ongoing three-digit gains in new daily cases have been frustrating expectations of an economic recovery as the infections will continue to reduce household consumption, taking a toll on the real economy, officials said. 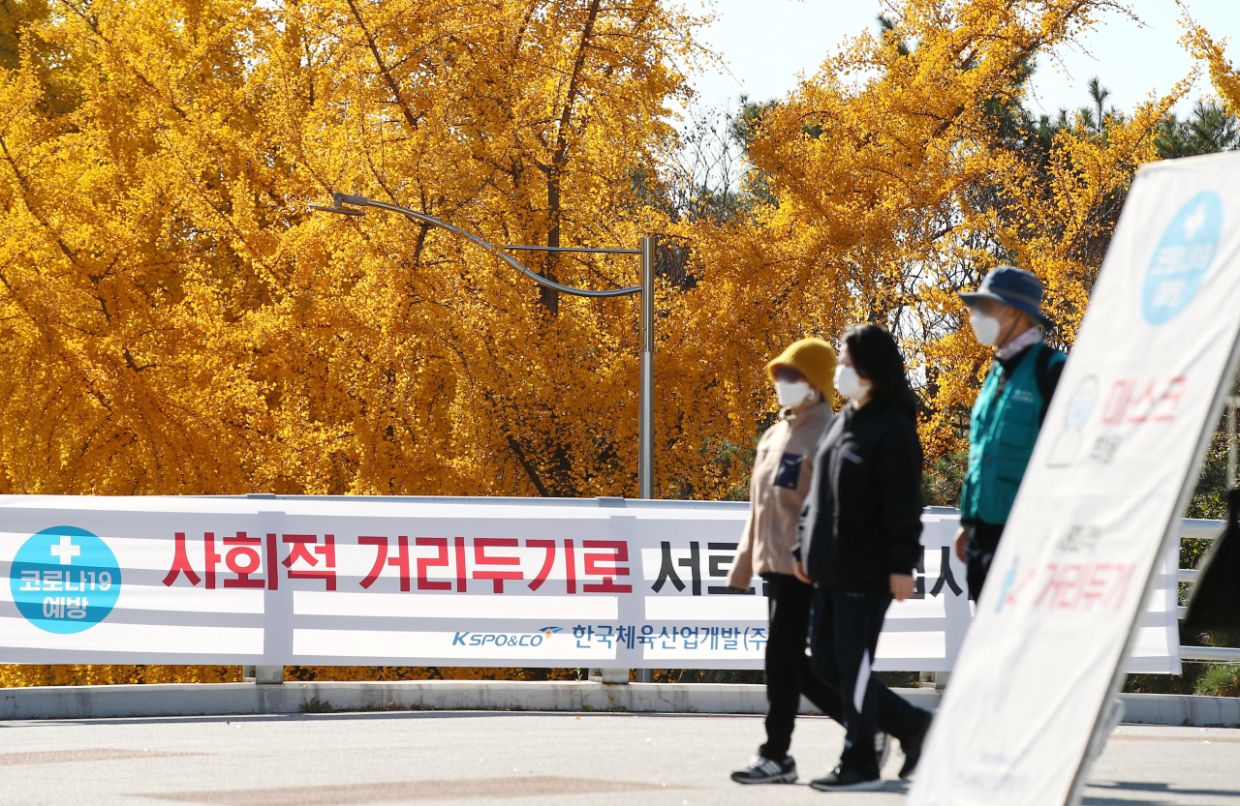 South Korea's new coronavirus cases rose by triple digits for the second day Monday (Nov 9), with a series of cluster infections being reported from venues of everyday life, ranging from markets to family gatherings, straining the country's anti-virus fight.

The country added 126 more Covid-19 cases, including 99 local infections, raising the total caseload to 27,553, according to the Korea Disease Control and Prevention Agency (KDCA).

It marked a slight drop from 143 cases added on Sunday, but Monday's caseloads are relatively high given the lower number of tests carried out over the weekend.

South Korea, which has been striving to curb Covid-19 from hospitals and nursing homes, recently saw more sporadic cluster infections at risk-prone facilities, such as nursing homes and private gatherings.

Over the past two weeks, around 35.7 percent of the newly added cases have been group infections, with some 13.6 percent not having clear transmission routes.

"When it comes to small-sized cluster infections, it is more complicated to identify their transmission routes," a local health official said during a daily briefing, adding the country will speed up efforts to curb the spread of the virus nationwide.

To identify possible "silent spreaders" who are infected with Covid-19 but do not have related symptoms, South Korea plans to carry out tests on people at all senior nursing homes across the country starting Monday. Health authorities previously carried out all-out examinations for those in the greater Seoul area.

Seniors are considered to be more vulnerable to Covid-19 than younger people. So far, more than 80 percent of people who died of the virus here were aged 70 and above.

Level 1 -- the lowest in the five-tier scheme -- signifies a controllable level of transmission that allows people to carry on with their ordinary lives while wearing masks and following social distancing rules at designated facilities.

But health authorities warned that the Level 1.5 scheme can be applied nationwide if the daily virus curve does not flatten soon.

The higher social distancing level has been in place in Asan and Cheonan, both located in central South Chungcheong Province.

Five of the newly added imported infections were Russian nationals, followed by four Americans. Others included those traced to Myanmar, India, and Italy. - The Korea Herald/Asian News Network