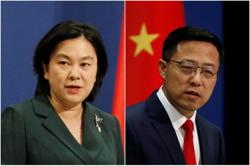 HONG KONG, Nov 8 (SCMP): China is expected to further cement its influence in Central Asia as regional leaders meet for a virtual security and economic summit, despite tensions between members.

Chinese President Xi Jinping is expected to deliver a keynote speech at the leaders’ summit of Shanghai Cooperation Organisation (SCO) on Tuesday, during a videoconference hosted by his Russian counterpart, Vladimir Putin, according to the Chinese foreign ministry.

The eight-member SCO is led by China and Russia and includes India, Pakistan and the four post-Soviet nations of Kazakhstan, Kyrgyzstan, Tajikistan and Uzbekistan.

It was established in 2001 and a summit has been held almost every year since then.

This year’s leaders’ meeting comes as the US steps up its engagement with the region and local economies reel from the coronavirus pandemic.

Uprisings in Kyrgyzstan and Belarus, an observer state, as well as the long-simmering conflict between two dialogue states of Armenia and Azerbaijan have also cast a shadow over the already loose security and economic framework.

For China and India, this will be the first multilateral meeting attended by their leaders since a bloody Himalayan border conflict erupted in May.

Beijing has ruled out the possibility of a bilateral meeting between Xi and Indian Prime Minister Narendra Modi on the sidelines of the summit.

In addition, relations between China and Mongolia, another observer state, have been tense since Beijing announced curbs on Mongolian language teaching in Inner Mongolia in September.

Instead, China’s focus will be on consolidating solidarity, strengthening multilateral cooperation and promoting post-pandemic economic recovery, according to vice-foreign minister Le Yucheng.

Observers said the political turmoil in Central Asia and the conflicts among members would not weaken the multilateral framework, which was created to stabilise relations between Russia, China and Central Asia.

Raffaello Pantucci, a Eurasian affairs specialist at the Royal United Services Institute in London, said the “mere fact of the sessions happening will strengthen China’s hand”.

“Beijing is the power which helped give birth to the SCO and its continued existence and growth is a positive reflection in many ways on Beijing,” Pantucci said.

“The fact that notwithstanding all these conflicts it continues to meet reflects China’s irresistible attractiveness or at the very least the attractiveness of the organisation that it has fostered and its role on the Eurasian continent.

“China in some ways does not need to position itself as a deal maker, the mere happening of the event and everyone showing up is a positive sign for Beijing.”

Mongolia: locked between China and the language of identity

China’s role as the leader in global economic recovery could also expand its influence within the bloc, observers said.

Artyom Lukin, an associate professor at Russia’s Far Eastern Federal University, said the states would be looking to China for economic solutions.

“China’s role will still be crucial because China is the only SCO country whose economy continues to grow despite the pandemic,” Lukin said.

One move in that direction is an agreement between China and the Eurasian Economic Union – a Russia-led economic and trade bloc that includes Belarus, Kazakhstan, Kyrgyzstan and Armenia – to expand cooperation on yuan settlement.

With Beijing and Moscow both facing pressure from the United States, the agreement is part of efforts to build a new Eurasian monetary and financial system to counter the US dollar-dominated global financial system.

Niva Yau, a resident researcher at the Organisation for Security and Cooperation in Europe Academy and a fellow at Foreign Policy Research Institute, said that with the Chinese economy recovering quickly from the pandemic, it was a matter of time before Xi’s administration rolled out a new wave of investment in Eurasia.

“And with the pandemic, there’s no better time to finally set up an SCO free-trade zone and an SCO regional bank,” Yau said.

“China is in the best position to stimulate the Eurasian economy at a time when this is most needed in SCO member states.”

Beijing is also expected to continue its vaccine diplomacy during the summit, with volunteers in Uzbekistan starting to take part in trials of Chinese Covid-19 vaccines.