Pavin Chachavalpongpun - From exile in Kyoto, a social media leader in the fight for Thailand and with the young behind him

KYOTO/BANGKOK, Nov 2: In the world of academia, Pavin Chachavalpongpun is known as an associate professor at one of Japan’s most prestigious universities, a sought-after expert on South-East Asian politics and a regular commentator for some of the West’s largest newspapers, writes Joel Tansey of the Japan Times.

But in his home country of Thailand, Pavin might write a lengthy Facebook post about the monarchy one minute, and in the next follow up with a TikTok video in which he lip-syncs in a theatrical manner to a traditional, not-to-be-mocked song praising the king, all while employing an array of the app’s comical filters.

What Pavin calls his “split personality” — part academic, part brash, unfiltered social media entertainer — has made him an internet celebrity in Thailand and helped foster serious, and not-so-serious, discussions about the monarchy in a country where a strict lese majeste law punishes criticism of the royals with up to 15 years in prison.

It has also put him at odds with the Thai government, leading to the revocation of his passport in 2014 after he ignored an order to appear at a military camp for an “attitude adjustment.” Pavin, who offered to send his dog in his place, became a political exile and applied for refugee status with the Japanese government in 2015.

Now, as thousands of Thai students defy government attempts to halt pro-democracy rallies, call for the resignation of Prime Minister Prayut Chan-ocha and break taboos by criticizing and seeking a reform of the monarchy, many are advertising the Facebook group of 2.1 million users that he created, while some are carrying posters with images of Pavin and even prostrating toward pictures of him.

Pavin, who supports the ongoing protests but has no formal connection to their student leaders, has mixed feelings about his ever-growing profile.

“It goes both ways,” Pavin said in a recent interview. “One is, you can’t help but feel good because people start looking at you as a kind of icon. They look up to you.”

On the other hand, he continued, the prostration — an act of subservience typically done in front of Thai royalty — is too much for him.

While noting that the protesters were merely doing so in jest, that kind of reverence for the monarchy is a big part of what Pavin wants to see eliminated.

But, in a way, they are taking a page right out of his own playbook.

“If you want to strip anything sacred, the best thing is to make fun of it,” he said.

Given Pavin’s growing impact on young protesters in Thailand, it seemed inevitable that the Thai government would act to further limit his influence and reach.

And to counter the growing protest led by youngsters in Thailand, thousands of royalists thronged to Bangkok's Grand Palace Sunday for a glimpse of the Thai king, a massive show of support after months of protests calling for an overhaul of the monarchy and government on Sunday night (Nov 1), reports AFP.

King Maha Vajiralongkorn sits at the apex of Thai power, his influence permeating every aspect of society. 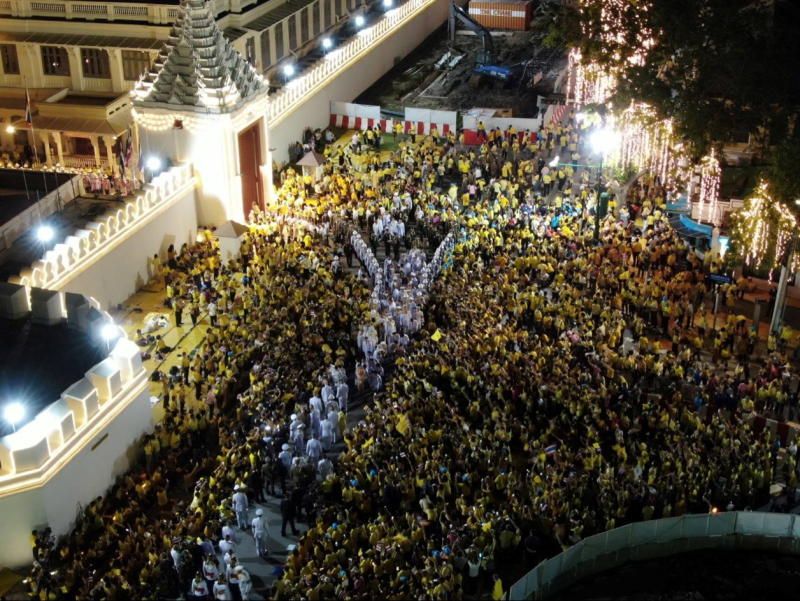 But the once-unassailable institution faces unprecedented challenges from a growing pro-democracy movement, some of whose leaders call for reforms including an end to draconian royal defamation laws.

On Sunday, royal devotion was on display as thousands wearing yellow shirts -- the royal colour -- waited near the Grand Palace clutching portraits of King Vajiralongkorn and Queen Suthida.

"We will live loyally, die faithfully," chanted the crowd as he emerged from the palace to greet them. "Long live the King!"

Zigzagging through the crowd, the inscrutable monarch received flowers from his supporters, at one point saying "thank you" and signing his portrait, according to footage from local media.

The king -- who spends long periods of time in Germany -- has been in the kingdom in recent weeks to mark a Buddhist holiday and the anniversary of his father's death.

The visit has coincided with non-stop demonstrations from mostly young activists, who have staged guerilla rallies drawing thousands to Bangkok's most traffic-clogged intersections as a show of defiance.

While the movement is leaderless, they are united in their demand for the removal of Premier Prayut Chan-O-Cha, a former military chief who came to power after staging a coup in 2014.

But calls for reform of the monarchy have drawn a backlash from thailand's conservative bloc, rousing royalist groups to stage their own rallies.

"We came here to show our loyalty to the king," said Bin Bunleurit, a Thai former actor who decried the students' demands.

Controversially, the students have also called for a clear accounting of the palace's finances -- which the extremely wealthy king took control of in 2018 -- and for the monarch to "stay out" of politics.

"It is not reform, it is about overthrowing the monarchy," Bin insisted to reporters outside the palace.

So far, pro-democracy protests have remained peaceful, but scores of students and activists have been arrested and charged -- some with the serious crime of sedition.

Over the weekend three high-profile student leaders were released on bail, only to be swiftly accosted as authorities attempted to re-arrest them on another charge.

A scuffle with plainclothes police landed them in hospital.

On Sunday night one of the trio, Parit "Penguin" Chiwarak, pledged in a Facebook post that they would keep pushing for their goals.