Indian army soldiers are seen near the site of a gunbattle between suspected militants and government security forces at Moachwah in Chadoora area of Budgam district on the outskirts of Srinagar on Oct 28, 2020. -

The Bharatiya Janata Party workers, including a local youth wing leader, were travelling in a car in the Kulgam district on Thursday night, when insurgents fired on them, local police said.

The trio were taken to a hospital where they were declared dead on arrival, police said, adding that a search for the militants had been launched.

Modi condemned the killings. "They were bright youngsters doing excellent work in Jammu and Kashmir. My thoughts are with their families in this time of grief. May their souls rest in peace,” Modi said on Twitter.

Several BJP workers have been killed in militant attacks in the insurgency-torn region in the recent months. In July, a local president of BJP, his father and brother were killed by rebels in Bandipora.

A month later, a BJP village council chief was shot dead by the militants.

Authorities also changed laws allowing people from the rest of the country to buy land in the disputed region, adding to the anger among local Kashmiris.

Indian-administered Kashmir has seen a separatist insurgency since the 1980s in which tens of thousands of people have been killed. India claims that Pakistan supports the militants, a charge Islamabad denies, calling them freedom fighters.

"At 8.20pm (local time) gunmen suspected to be militants at Y.K. Pora area of Qazigund here stopped a car in which three people were traveling," a police official posted in Kulgam said. "The militants fired upon them indiscriminately killing one on spot, while as two others succumbed on way to the hospital."

A health official at Qazigund hospital said the trio had multiple bullet wounds on their bodies.

BJP in indian-controlled Kashmir said the trio were party activists.

Several BJP workers have been killed in the past few months.

In July this year, a young BJP leader along with his two family members (father and brother) were killed outside their residence in Bandipora town of the region.

Militant groups opposing New Delhi's rule are engaged in a guerilla war with indian troops in the region since 1989. 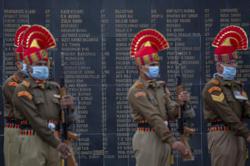