VANCOUVER, Oct 30: Canada’s court in its latest ruling has allowed the lawyers of Huawei’s Meng Wanzhou (pic) to produce new evidence to prove their claims that the US had misled Canada in her extradition case, according to a report by Global Times on Friday.

“In accordance with the latest ruling, Meng, the 48-year-old senior executive who is also daughter of Ren Zhengfei, founder of Huawei, will be permitted to provide additional evidence in order to prove that the US omitted some key components of the case that could challenge the reliability of their extradition request, ” reported Global Times, citing the ruling written by Associate Chief Justice Heather Holmes.

Chinese authorities and people widely view the case as a political manoeuver by the US.

The latest ruling was made after Meng's defense team argued that the ongoing extradition proceedings constitute an abuse of process that should be terminated, saying the documents provided by the US to Canada contained material omissions and misrepresentations.

Meng is charged with fraud on allegations that she lied to British bank HSBC concerning Huawei's relationship with its former subsidiary Skycom in Iran, which was accused of violating US sanctions on Iran.

The US authorities have provided slides from a PowerPoint presentation Meng gave an HSBC executive in Hong Kong in August 2013, widely considered as a key document in proving Meng lied about Huawei's relationship with Skycom.

However, Meng's lawyers claim that the US deliberately omitted two slides from the PowerPoint, which showed that Meng didn't mislead the bank.

The latest progress may again place HSBC under the spotlight again in China, with many questioning whether it had conspired with the US.

Meng was arrested at Vancouver International Airport in December 2018 by Canadian authorities at the request of the US for allegedly violating US law. She faces fraud charges and the US Justice Department is seeking her extradition to the US.

Meng is also wanted in the United States on fraud charges related to violations of US sanctions in Iran.

Her lawyers say the US omitted key information in a case summary that undermined the allegations of fraud, adding her arrest and extradition are invalid.

British Columbia Supreme Court Justice Heather Holmes said in her ruling there "is an air of reality to Ms. Meng's allegations of abuse of process in relation to the requesting state's conduct."

The case record provided by the US includes slides from a Powerpoint presentation she gave in 2013.

It was made to an HSBC executive after the British banking group, worried over potential Iran exposure, requested an explanation.

The US accuses Meng of hiding Huawei's relationship with former subsidiary Skycom in Iran from HSBC bank.

Meng insists she was upfront with HSBC, which her lawyers say was left out in the US warrant and the missing slides will show. 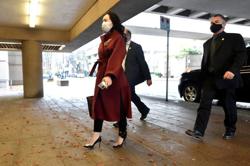 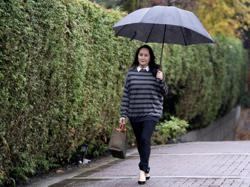