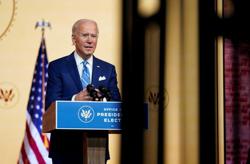 SINGAPORE, Oct 30 (Reuters): Strong gains in the Chinese yuan supported most Asian currencies on Friday, shielding them from a broader gloomy mood weighing on regional equities ahead of the US presidential election.

Worries about the outcome of Tuesday's election have remained at the fore, given the stark difference between Democratic candidate Joe Biden and President Donald Trump's views on foreign policy and trade, particularly towards Asia.

The yuan jumped 0.5% against the dollar after China's leaders endorsed a new five-year plan to drive sustained economic growth, which markets believe will require a stronger currency.

That helped boost the closely tied Singapore dollar by 0.2%, while the Thai baht rose by a similar margin.

While cases are surging elsewhere, the Covid-19 situation in Asia remains largely under control, with China's swift economic recovery driving the resilience of the yuan and other Asian currencies, said Sim Moh Siong, FX strategist at Bank of Singapore.

"The second factor is the US elections. If Biden wins, and polls are indicating he's in the lead, it could lead to a less aggressive trade policy, further anchoring the yuan," he added.

"For Asia, overall, the risk environment is going to be cautious, but there's no panic."

The region's equities were subdued after Wall Street's sell-off as cases continued to surge in the United States, while fears of more lockdowns across Europe, following France and Germany's moves this week, also dented the mood.

For October, most Asian currencies were set to end higher, with the South Korean won logging its best monthly performance since June 2019, with a 3% gain.

Most stock markets, however, were set to end the month with losses.

The Thai index was on track for a 3.4% drop sparked by political ructions and protests. Philippines' equities, in contrast, breezed past peers with an 8% gain, as a the gradual reopening of the economy and upbeat Covid-19 case trends spurred investor confidence. In the week ahead, the focus will turn to Malaysia's central bank policy meeting on Tuesday, followed by the government's 2021 budget presentation on Friday.

The latter is seen as a key test to gauge support the prime minister wields amid recent political tensions, with fears prevalent that the budget bill might not get through parliament given the slim coalition majority his government holds.

The Indian currency market was shut on Friday for a local holiday, while in Indonesia, both equities and forex markets were closed. - Reuters