A total of 53 new asymptomatic cases, including 39 arriving from outside the mainland, were reported, the commission said in its daily report.

It added that 24 confirmed cases arriving from outside the mainland were reported Thursday.

In total, mainland China reported 25 new Covid-19 cases on Oct. 29, down from 47 a day earlier, the country's national health authority said on Friday.

Of the new cases, 24 were imported infections originating from overseas. The National Health Commission said in a statement that one local infection was reported in the eastern province of Shandong.

The commission also reported 53 new asymptomatic cases, up from 16 a day earlier. china does not count symptomless patients as confirmed Covid-19 cases.

Meanwhile, six new suspected Covid-19 cases from outside the mainland were reported in Shanghai. No new deaths related to the disease were reported, the commission added.

Of the new imported cases, 13 were reported in Shanghai, four in Fujian, two each in Tianjin, Guangdong and Sichuan, and one in Yunnan, the commission said in its daily report.

On Thursday, 24 Covid-19 patients were discharged from hospitals after recovery on the Chinese mainland.

By the end of Thursday, a total of 3,332 imported cases had been reported on the mainland. Of them, 3,044 had been discharged from hospitals after recovery, and 288 remained hospitalized.

No deaths from the imported cases had been reported.

As of Thursday, the total number of confirmed Covid-19 cases on the mainland had reached 85,940. Of them, 339 patients were still being treated, including seven in severe condition.

Altogether 80,967 patients had been discharged after recovery, and 4,634 had died of the disease on the mainland, the commission said.

There were six suspected Covid-19 cases on the mainland, while 12,863 close contacts were still under medical observation after 1,255 were discharged Thursday, according to the commission.

Also on Thursday, no asymptomatic cases were re-categorized as confirmed cases, while 592 asymptomatic cases, including 439 from outside the mainland, were still under medical observation, the commission said. 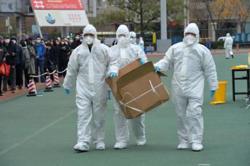