Students celebrate before their graduation ceremony as some students have boycotted the ceremony due to it being led by King Maha Vajiralongkorn, at Thammasat University in Bangkok on Friday (Oct 30, 2020). - Reuters

BANGKOK, Oct 30 (Reuters): Some students sympathetic to Thai protesters said on Friday they were boycotting graduation ceremonies led by King Maha Vajiralongkorn in a show of anger at the monarchy amid growing calls to reform it.

The ceremonies, at which the monarch personally hands out degrees, are a rite of passage for graduates and their families with photographs of the moment displayed with pride in many Thai homes.

But protests since mid-July have brought open criticism of the monarchy and calls to curb its power, defying a longstanding taboo and lese majeste laws that set a jail term of up to 15 years for criticism of the king or his family.

Suppanat Kingkaew, 23, said he was boycotting the ceremonies being held on Friday and Saturday at Thammasat University, long viewed as a hotbed of radicalism and scene of a massacre of pro-democracy protesters by royalist state forces in 1976.

"Whatever it takes so that the hall is left with the smallest number of people," Suppanat told Reuters. "This is to send an indirect message that some of us are unhappy with the monarchy and we want change."

The university did not respond to a request for comment.

The Palace did not comment, as it has not done since protests began in mid-July.

Protests initially called for a new constitution and the resignation of Prime Minister Prayuth Chan-ocha, a former junta leader, but then demands evolved to include reducing the monarchy's power.

It was unclear how many Thammasat students would follow the boycott.

"I want the photograph. It's a once-in-a-lifetime event," he said.

Degree ceremonies presided over by the king began before the end of absolute monarchy in 1932 at a time the palace sought to strengthen its relationship with a growing middle class.

They gained greater importance under the king's late father, King Bhumibol Adulyadej, who spent decades working to strengthen the prestige of the monarchy - which according to the constitution must be revered.

Protesters say the king's powers should be reduced and changes that gave him personal control of some army units and the palace fortune should be reversed. They also want the prime minister removed, accusing him of foul play in 2019 elections - an accusation he denies.

Of those students planning to attend the ceremonies, some said family pressure had outweighed politics. 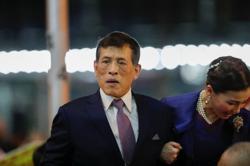