DENPASAR, Bali (The Jakarta Post/ANN): The number of visitors on the resort island of Bali has doubled ahead of the long weekend at the turn of the month. With Maulid (commemoration of the birthday of Prophet Muhammad) falling on Thursday (Oct 29) and the government having declared Wednesday and Friday collective leave days, most Indonesians are enjoying a five-day break.

According to Angkasa Pura’s records, around 4,900 passengers arrived at I Gusti Ngurah Rai International Airport on Sunday.

The number rose to 5,000 and then to 6,000 passengers on Monday and Tuesday, respectively, Andanina said on Wednesday, as reported by kompas.com.

The average number of daily passengers arriving in Ngurah Rai airport was between 3,000 to 3,500.

“The holiday started [early] for civil servants and state-owned enterprises employees.” Thirty per cent of the passengers landing on Bali came from Jakarta. The rest came from Surabaya, East Java; Makassar, South Sulawesi and Lombok Island in West Nusa Tenggara.

The spokesperson said the airport had stepped up efforts to anticipate crowds and increased efforts to enforce health protocol.

Meanwhile, state-owned toll road operator PT Jasa Marga predicted a spike in the number of vehicles leaving Jakarta on Wednesday, while most holiday-goers would return on Sunday.

The company said around 147,000 vehicles had left the capital on Tuesday, two days before Maulid.

Jasa Marga spokesperson Dwimawan Heru said the company would impose restrictions on the number of visitors and vehicles allowed to enter a rest area in order to uphold physical distancing. The toll road operator would work with the police to manage traffic heading toward rest areas.

“We urge road users to [uphold their commitment to] comply with health protocols wherever they are, ” Heru said.

Jasa Marga has suspended construction work for the long weekend to prevent congestion on its toll road.

It has also deployed 24-hour standby maintenance staff and ensured water supply for each rest area to prevent a water shortage during the holiday season. - The Jakarta Post/Asia News Network 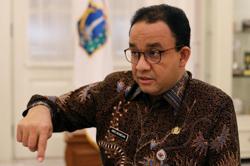