Tourism is one of the four pillars supporting Cambodia's economy, and the country received 6.6 million international visitors in 2019. - AFP

PHNOM PENH (Xinhua): Cambodia had received 1.24 million foreign visitors during the first nine months of 2020, down 74 per cent from 4.81 million over the same period of last year, said the latest report released by the Ministry of Tourism on Thursday (Oct 29).

China, Thailand and Vietnam were the biggest sources of foreign travellers to the kingdom during the January-September period this year, the report said.

In September alone, Cambodia attracted only 21,137 foreign visitors, a 95.3 per cent drop from 453,909 over the same month last year, the report said.

The sharp decline was due to the Covid-19 pandemic that forced the Southeast Asian nation to impose entry restrictions on all foreign travellers since March.

Ministry of Tourism's secretary of state and spokesman Top Sopheak predicted that international visitors to the kingdom will start to rebound gradually from the first quarter of 2021 if Covid-19 vaccines are available.

"I believe that China will remain the largest source of tourists to Cambodia during the post-Covid-19," he told Xinhua.

Tourism is one of the four pillars supporting Cambodia's economy, and the country received 6.6 million international visitors in 2019, earning a gross revenue of US$4.9 billion. 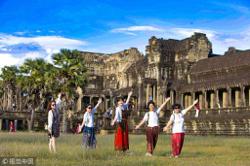