ICA said the technology will provide even more reliable authentication of the identity of travellers.- ST/ANN

SINGAPORE (The Straits Times/ANN): Facial and iris scans have replaced fingerprint scans as the main mode for identifying travellers at all immigration checkpoints, the Immigration and Checkpoints Authority (ICA) announced on Wednesday (Oct 28).

Singaporeans, permanent residents, long-term pass holders and other travellers who have registered their iris and facial biometrics with the agency can use the new scans at all land, sea and air checkpoints.

More than two million Singaporeans, or about 70 per cent of all eligible Singaporeans, have registered their iris and facial biometrics with the agency, while 130,000 permanent residents have done so.

Those who have not, or are unsuccessful when using the iris and facial scans at checkpoints, will still be able to check in by scanning their fingerprints, said ICA, which rolled out the technology together with the Home Team Science and Technology Agency (HTX).

ICA said the technology, which was trialled at Changi Airport and Tuas Checkpoint last year, will provide "even more reliable authentication of the identity of travellers", and is less prone to misuse as it requires specialised equipment.

Wong Weiyang, lead engineer of HTX's Biometrics and Profiling Centre of Expertise, said iris patterns were chosen as a biometric identifier as they are more varied and unique than fingerprints.

They are also stable against ageing, and will be the same from birth to death, said Wong.

An iris scan provides almost 250 feature points for matching, as compared with about 100 points for a fingerprint. The facial scan acts as a "second check" for the person's identity, said ICA.

Travellers who have issues verifying their identities due to aged, scarred or dry fingers would be able to use the automated clearance lanes easily with this technology, said ICA.

"With contactless technology, it allows us to capture the biometrics without any physical contact with the machine, so it (the process) is hygienic. This is especially important, given this current Covid-19 pandemic situation," said DSP Tiang.

The system takes less than a second to match a traveller's biometrics with ICA's database.

Foreign visitors will need to enrol their biometric details with the agency when they arrive in Singapore for the first time.

They can subsequently use the iris and facial scanners upon their departure and when they return to Singapore, if they are still using the same passport.

However, children below six years old must still use the manual clearance lanes, as they are not eligible for the facial and iris scans, said ICA, noting that their physical features and related biometrics are still developing.

The agency added that it eventually plans for all Singapore residents to clear immigration without presenting a passport from 2022.

Those who are keen to register their iris and facial biometrics can approach ICA officers at the checkpoints when travelling.

They may also do so when visiting the ICA building for immigration facilities. - The Straits Times/Asia News Network 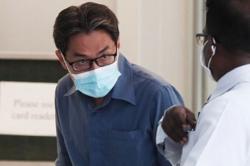