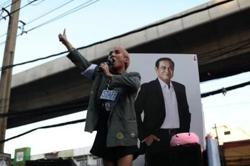 Show of support: A royalist supporter holding a portrait of King Maha Vajiralongkorn at a rally in Narathiwat. — AFP

Thailand’s Parliament began a special session that was called to address tensions as pro-democracy protests draw students and other demonstrators into the streets almost daily demanding the prime minister’s resignation.

As Speaker of the House Chuan Leekpai began the session yesterday, only 450 of the total of 731 members of both houses had signed in for the meeting.

The demonstrations by student-led groups in Bangkok and other cities have three main demands: that Prime Minister Prayut Chan-o-cha step down, the constitution be amended to make it more democratic and reforms be made to the monarchy to make it more accountable.

“The only way to a lasting solution for all sides that is fair for those on the streets as well as for the many millions who choose not to go on the streets is to discuss and resolve these differences through the parliamentary process, ” Prayut said last week.

The non-voting session of Parliament is expected to last two days.

“Though the people have the freedom to protest based on the constitution, authorities need to control the illegal protests, ” said Prayut, who recalled parliament from recess last week.

“We do not want to see clashes or riots in the country, ” he said, accusing some protesters of “inappropriate actions”.

While Prayut acknowledged the protesters’ demands in his opening speech, the two-day parliamentary session has not listed them on its agenda.

However, an incident this month when protesters flashed three-finger salutes – a symbol of their movement – at Queen Suthida’s motorcade is up for discussion.

In his speech during the session, Pheu Thai leader Sompong Amornvivat outlined the reasons why Prayut should resign and called for protest leaders to be released.

He said Prayut should resign because he is a burden on the country.

He also insisted that all protesters who have been thrown behind bars unfairly should be released immediately.

The protesters allege Prayut, who led a coup in 2014 as the army chief, was returned to power unfairly in last year’s election because laws had been changed to favour a pro-military party. The protesters also say the constitution, written and enacted under military rule, is undemocratic.

Parliament in September was scheduled to vote on six proposed constitutional amendments but instead set up a committee to further consider such proposals, and then recessed.

Meanwhile, the protests targeting the government and monarchy have hardened feelings among royalists, who are pushing back with aggressive abuse online.

The messages, some of which have got thousands of likes, are a danger sign for some, who point to the violent confrontations that have rocked Thailand in the past.

Some memes circulating on social media threaten violence – from a rifle-wielding man claiming the monarchy must be “defended at all costs” to a picture of a coffin photoshopped next to an activist.

“We have no intention of using violence, ” the 59-year-old retired gynaecologist said.

The monarchy is necessary for stability, he insists, slamming Thailand’s “brainwashed” youth.

“They don’t want to reform royalty, they want to destroy it, ” Warong says.

“Without a monarchy, there would be a civil war.” — The Nation/ANN/Agencies 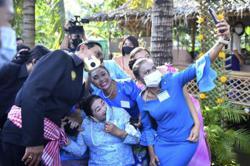 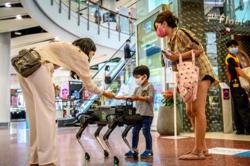