JAKARTA, Oct 27 (Xinhua): The Indonesian province of Riau on the island of Sumatra which had struggled to curb land and forest fires in the past has kept the number of wildfires low in the region so far. Between Jan 1 and Oct 21, 2020, there was a nearly-100-per cent decrease in the number of land and forest fires compared to that of the same period last year, according to the Riau Disaster and Mitigation Agency's observations. The agency reported that wildfires have burned 1,587 hectares of land and forests in the province from the beginning of this year until Wednesday last week. "Until Oct. 21, Riau has seen a 99.83 percent decline in the number of land and forest fires compared to that in 2019. Thanks to our hard work," the agency's head Edwar Sanger told a meeting on land and forest fires mitigation in Riau's capital city of Pekanbaru on Monday, as cited by state news agency Antara. Referring to data from satellite surveillance from Indonesia's National Institute of Aeronautics and Space (LAPAN) and NASA's Terra/Aqua satellite, the agency said that until last Wednesday there had been 2,730 hotspots in the region, compared to the 4,682 hotspots in the same period last year. The Riau Disaster and Mitigation Agency also reported that 9,706 hectares of land were on fire last year. During the period, wildfire smokes from neighbor provinces, including Jambi and South Sumatra, spread to the province. The Riau administration declared an alert status from February until October. Throughout last year, the Riau police had processed 74 cases of forest fires set by individuals and corporations, with at least 81 people were named suspects. The alert status for forest and land fires was again imposed by the Riau administration in February this year amid the COVID-19 pandemic in the country. The policy will last until the end of this month. Forest fires have been an annual problem in Indonesia since the mid-1990s. It was linked to illegal slash-and-burn practices on the islands of Sumatra and Kalimantan, which then spread quickly during the dry season. The fires usually result in choking smokes blowing to the neighboring countries including Singapore, Malaysia and Brunei. Indonesia suffered its worst and deadliest forest fires in 2015, mainly hitting the islands of Sumatra and Kalimantan. - Xinhua
Article type: metered
User Type: anonymous web
User Status:
Campaign ID: 18
Cxense type: free
User access status: 3 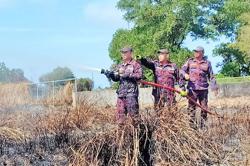