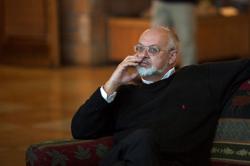 KUALA LUMPUR, Oct 27 (Reuters): Malaysian shares rose on Tuesday as political tensions eased after the largest party in the ruling coalition said it would back the prime minister, providing some respite for the premier, who has faced calls to resign.

Most other Asian stock indices edged lower, as a spike in global Covid-19 (coronavirus) cases threatened to derail a quick economic recovery, even as uncertainty ramped up with just days left for the US presidential election.

"The king's advice for members of parliament to not continue with any irresponsible action that could undermine the stability of the current administration could quiet political noise in the near term," analysts at CGS CIMB wrote in a note.

Philippine stocks ended 1.2% lower, notching their biggest drop since Sept 11, as investors booked gains after a massive six-session run of gains of 10%.

The peso strengthened during the session after the central bank governor said there was no immediate need to ease monetary policy further, given the slew of indicators that point towards economic recovery.

While inflation afforded the room to ease monetary policy, Bangko Sentral ng Pilipinas Governor Benjamin Diokno said in an interview the central bank "right now is not inclined to do that".

Ruben Carlo O. Asuncion, chief economist at Union Bank of the Philippines, said while the central bank's policy direction was largely the same as in the recent past, claims of economic recovery gaining momentum through sequentially improving economic indicators was gaining traction.

"The only flag that I may have to raise right now is a possible resurgence of the virus down the road," he said, citing a resurgence of cases in several developed nations. Philippine shares have seen increased foreign inflows recently and the peso has held its position as the second-best performer among Asian currencies this year, as coronavirus infections remain under control and the economy reopens.