Other politicians including Congress party's Rahul Gandhi also attended big rallies in the eastern state of Bihar, where local elections start in phases from next week, with many unmasked participants trying to get a glimpse of the leaders.

India has been among the worst hit by the coronavirus, with the second-highest amount of cases globally, and experts worry big gatherings like the political rallies could trigger a fresh spike in cases.

"I want to congratulate the people of Bihar for fighting a disaster like corona so well... the situation in some of the richest countries in the world is not hidden from anyone," Modi said at the first of the three rallies scheduled in the state.

The 70-year-old, who has himself highlighted the importance of social distancing, took off his mask before addressing a crowd from a high platform.

Bihar, India's third-most populous state and one of its poorest, has recorded more than 200,000 coronavirus infections, fewer than richer states like Maharashtra and Andhra Pradesh.

A government panel has warned, however, that if precautions like wearing masks and social distancing are not followed around India, cases could spike by up to 2.6 million in just a month.

"There is some evidence that large gatherings cause rapid spread," the government-appointed panel of scientists, virologists and other experts said earlier this week.

On Saturday morning, India's Covid-19 tally reached 7,814,682 as 53,370 more cases were registered during the past 24 hours, said the latest data released by the federal health ministry on Saturday.

The death toll surged to 117,956, with 650 deaths recorded since Friday morning.

This is the second consecutive day when the number of active Covid-19 cases has been below the 700,000-mark in the country. It is also the first day when the total number of people cured crossed the 7-million mark.

Indian government's focus has been on ramping up Covid-19 testing facilities across the length and breadth of the country.

Earlier this week, Modi had cautioned the citizens to strictly follow the Covid-19 guidelines and be safe from the pandemic.

Adequate care should be taken by the countrymen amid the ongoing festive season when large crowds are witnessed in market areas, he added.

In a televised address to the nation, Modi appealed to all the countrymen to wear masks while venturing out of homes, regularly wash hands and maintain social distancing as, according to him, the lockdown was over but the virus had not been over yet. - Reuters
Article type: metered
User Type: anonymous web
User Status:
Campaign ID: 18
Cxense type: free
User access status: 3 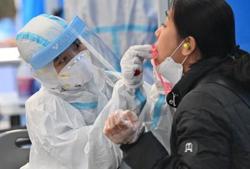