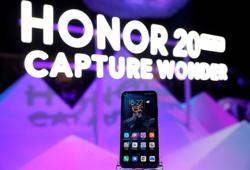 BEIJING, Oct 24 (China Daily/ANN): Huawei Technologies Co's year-on-year revenue growth rate in the third quarter slowed down as the US government's intensified crackdown on the company crippled its supply chain.

But the Chinese tech giant still managed to generate 671.3 billion yuan (US$100.6 billion) in revenue for the first nine months of the year, a 9.9 per cent growth over the same period in 2019, which analysts said reflected the company's resilience and technological prowess amid intense pressure.

Huawei has not announced results for the third quarter, but a calculation based on its previous quarterly data showed that revenue for the period rose by 3.7 percent, marking a slowdown in growth from the second quarter, when revenue grew about 23 percent.

The company said in a statement: "As the world grapples with Covid-19, Huawei's global supply chain is being put under intense pressure and its production and operations face significant challenges. The company continues to do its best to find solutions, survive and forge forward, and fulfill its obligations to customers and suppliers."

Huawei said its net profit margin during the period was 8 percent, and its business results basically met expectations. But it did not break down the detailed figures for its individual business groups as the company had done for the past quarters.

Xiang Ligang, director-general of the Information Consumption Alliance, a telecom industry association, said: "Huawei has tried its best to maintain its normal business operations amid the US government sanctions and it has in fact done a good job in that respect, given all the challenges and curbs it was forced to deal with."

Currently, Huawei is facing one of the darkest moments in its history after the US government hit the company with several rounds of intensified restrictions on its access to US technologies, including semiconductor components and equipment. The latest round of curbs is aimed at destroying Huawei's in-house chip design unit Hisilicon.

Amid such mounting pressure, the company said: "Huawei believes that rapid and healthy development within the ICT industry will rely on open collaboration and mutual trust across the global industry, so it will continue working closely with its global partners and using its innovative ICT technologies to create greater value for customers despite the complex situation it is currently facing."

The comments came just a day after Huawei unveiled its much-anticipated Mate 40 series 5G smartphones powered by its most advanced chips. The Huawei Mate 40 Pro and the Mate 40 Pro Plus smartphones are powered by the Kirin 9000 chip, which is designed by Hisilicon and called by the company as "the most sophisticated 5-nanometer 5G system on chips, or SoC, available".