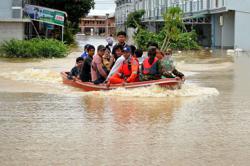 PHNOM PENH, Oct 24 (Phnom Penh Post/ANN): Flash floods in Cambodia have left 39 people dead and forced the evacuations of 46,216 others, Seak Vichet, a spokesman for the National Committee for Disaster Management (NCDM), has announced.

Seasonal rains, exacerbated by tropical storms, have caused floods in 19 of the kingdom's 25 cities and provinces since the beginning of the month, he said, adding that 483,140 people have also been affected.

"As of Thursday evening, the floods have killed 39 people," he told Xinhua, adding that the worst-hit provinces included Banteay Meanchey, Pursat, Battambang and Kampong Thom as well as the southwestern suburb of Phnom Penh.

The floods have also submerged 111,354 houses and 316,469 hectares of rice and other crops, the spokesman said.

Last year, Mekong River and flash floods claimed 30 lives, as storms killed eight people and injured 131 others, according to the NCDM.

Menawhile, Prime Minister Hun Sen hit back at critics who raised suspicions about donors’ contributions during disasters in the country.

While visiting flood victims and handing out supplies in Banteay Meanchey province, he said the donors were simply acting from their hearts.

“I do not make enemies with money. When generous people contribute from their heart, we accept it as a kind act. They (critics) said we collect money to buy cars, we collect money for Covid-19, everything is about collecting money.

“As a matter of fact, you are the ones who raise money, put it in envelopes and then in your own pocket. They were seen in video putting (donated) money into their own pockets,” he added.

As of Friday, more than US$8 million has been donated to help flood victims in the country, the prime minister said.

Regarding the donations to help prevent Covid-19, Hun Sen said he did not call for people to donate.

The King and Queen Mother Norodom Monineath Sihanouk contributed money and okhnas followed their lead, he said using the honorific bestowed on those who donate at least US$500,000 to the state for development. The money raised to combat Covid-19 is estimated at nearly US$20 million. - The Phnom Penh Post/Asian News Network 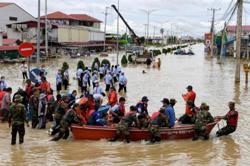