Shell we eat?: A peeled crawfish in a popular dish.

Soon, they will have a new group of beneficiaries – gourmets in love with freshwater crawfish – known in Chinese as xiaolongxia, or little lobsters.

A domestic space-based system will help freshwater crawfish farmers in Hubei province – the largest producer in China of this gastronomically popular shellfish – improve the quality and yield of their produce, which will eventually bring more delicious crawfish to consumers, according to the system’s manager at China Aerospace Science and Industry Corp, a State-owned space conglomerate.

“Specifically speaking, we will set advanced sensors in padi fields to monitor the condition and detect pollutants in waters in which crawfish are raised.

The sensors will also be used to examine whether the soil beneath the water is good for crawfish farming, ” said Du Li, deputy general manager of Leobit Technology, a CASIC subsidiary in Wuhan, capital of Hubei, that designs, builds and runs the Xingyun satellite system.

“The data collected will then be uploaded to our Xingyun satellites and transmitted to aquaculture authorities or farm owners to be analysed and considered when making decisions, ” Du said.

“The majority of crawfish farms in Hubei use padi fields to raise their crawfish because it is better than other methods in terms of efficiency, environmental protection and economy.

The water and underwater soil are the most important determinants of the quality and taste of the crawfish, so they should be monitored on a regular basis, ” Du said in an exclusive interview. — China Daily/ANN 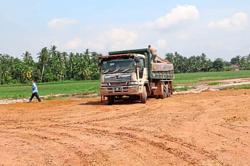