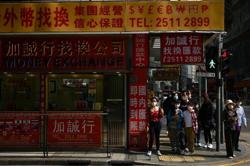 Among the newly reported cases, 14 had a travel history during the incubation period.

The remaining case was epidemiologically linked with local case, the CHP said.

It marked the third day without untraceable Covid-19 cases in Hong Kong, which saw 19 imported cases and two traceable local infections over the weekend.

According to Hong Kong's Hospital Authority, 127 patients are being treated in hospitals, including 12 in critical condition.

The CHP said the sole local case, involving a 21-year-old woman, was linked to a previous patient, marking the third consecutive day that the city saw no new infection of unknown origin.

She was believed to be a close contact of a worker at the Royal Garden hotel in Tsim Sha Tsui, which is related to an infection cluster of nine people.

The 14 imported cases on Monday were from the Philippines, Turkey, the United States, the United Kingdom, Indonesia, India, Spain, Russia and Kazakhstan, the CHP said.

The city’s total of confirmed infections stood at 5,256, the CHP added.

According to the Hospital Authority (HA), a total of 127 confirmed Covid-19 patients were being treated in 18 public hospitals as of Monday, including 12 patients in critical condition, five in serious condition and the remaining 110 patients in stable condition.

Meanwhile, a total of 16,802 persons provided specimens at the four temporary virus testing centers that were set up in Wan Chai, Kwai Tsing, Kowloon City and Yau Tsim Mong districts. According to a government statement, no one tested positive.

While the temporary testing centers are now closed, members of the public can still get free Covid-19 tests by collecting deep throat saliva specimen collection packs at the 46 general outpatient clinics of the HA.

A government spokesman said in the statement that all members of the public who have doubts about their health condition should undergo testing to protect themselves and others. - The China Daily/Asian News Network