A Buddhist monk, supporter of pro-democracy movement, displays a placard during a protest rally at an intersection in Bangkok, Thailand, Sunday (Oct 18, 2020). Pro-democracy activists in Thailand launched their fifth straight days of protests on Sunday, scheduling demonstrations not just in the capital but also at several other locations around the country. - AP

BANGKOK, Oct 18 (AFP): Thousands of pro-democracy protestors took over a major Bangkok intersection on Sunday with posters bearing the faces of arrested activists, defying a ban on gatherings and stern warnings from authorities who have escalated a crackdown in recent days.

The youth-led movement has suffered several blows this week, with scores arrested after demonstrators surrounded a royal motorcade and flashed a pro-democracy salute to Queen Suthida during a Wednesday protest.

The government reacted by imposing "serious" emergency measures banning gatherings of more than four and allowing for the arrest of protest leaders, many of whom are calling for the removal of Prime Minister Prayut Chan-O-Cha, a former military chief first brought to power in a 2014 coup.

Police also deployed water cannon against unarmed demonstrators on Friday in Bangkok's central shopping district in an escalation of tactics that drew outrage across Thai society.

But the crackdown has emboldened the movement's mostly young supporters who have turned up in large numbers to daily guerrilla protests around Bangkok.

The locations are announced an hour before to outwit authorities, who shut down much of the city's Skytrain and underground rail services to discourage people from joining in.

Thousands descended on the major traffic thoroughfare from 4pm (0900 GMT) shouting "Free our friends" while carrying posters of arrested activists.

They include human rights lawyer Anon Numpa, Parit "Penguin" Chiwarak, and Panusaya "Rung" Sithijirawattanakul -- three of the most recognisable faces in the leaderless movement who have consistently called for reforms to the monarchy. 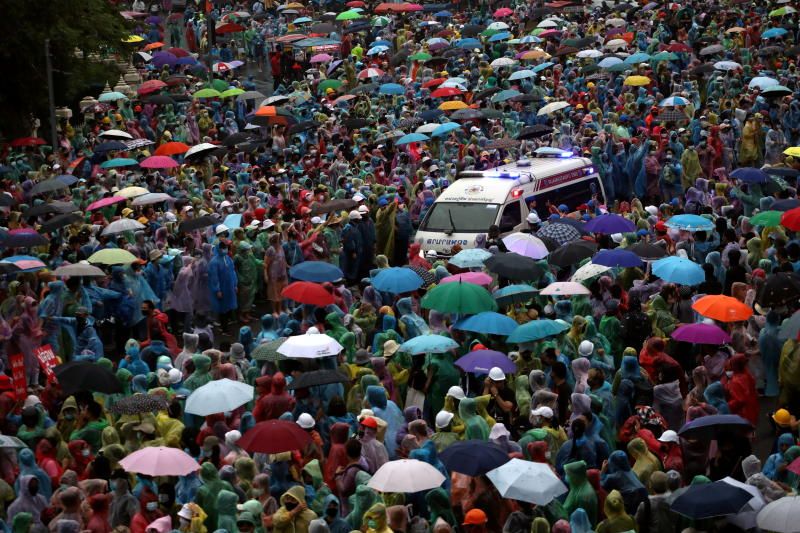 Pro-democracy protesters make way for an ambulance during an anti-government protest, in Bangkok, on Sunday (Oct 18, 2020). - Reuters

Among their demands is the abolition of a draconian royal defamation law -- which shields King Maha Vajiralongkorn from criticism -- and a call for the monarch to stay out of the country's turbulent politics.

Once-taboo in Thailand, the issue of royal reform demanded by protesters is one of the biggest challenges facing the kingdom's conservative military-aligned government.

Across town in Asok, a popular shopping and restaurant district, a smaller group of protesters gathered and practiced hand signals to warn each other if authorities were to issue another severe crackdown.

"I think the government used too severe of measures against students on Friday, they were just kids with empty hands," said 65-year-old Suk. "All they had were their mobile phones."

"If they defy it, police will do whatever is necessary to enforce the law," he said.

"Free our friends", the protesters called out as they stood in a rain, a mass of colourful ponchos and umbrellas. Some held up pictures of detained protest leaders. Thai Lawyers for Human Rights said at least 80 protesters had been arrested since Oct 13 with 27 still being held.

Police have given no full breakdown. 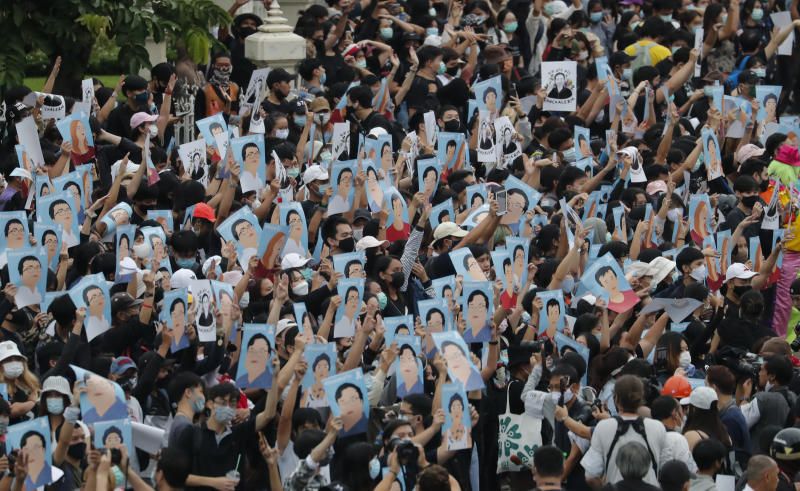 Pro-democracy demonstrators holding posters of protest leaders who have been arrested, during an anti-government protest at Victory Monument in Bangkok, on Sunday (Oct 18, 2020). - AP

They made no immediate steps to intervene as protesters took over Victory Monument and Asok, two of Bangkok's most important transport hubs. Police said there were around 10,000 people at Victory Monument alone.

"We are committed to maintain peace and order. In order to do so we are bound by laws, international standards, human rights." police spokesman Kissana Phathanacharoen told a news conference.

Demonstrators nonetheless distributed helmets and goggles to protect them during any attempt to disperse them by force.

Protesters also said that Prime Minister Prayut engineered last year's election to keep power he seized in a 2014 coup - an accusation he denies.

The demonstrations have also become more openly critical of King Maha Vajiralongkorn's monarchy, breaking a longstanding taboo, demanding curbs to its powers despite potential jail terms of up 15 years for anyone insulting the king.

During demonstrations by tens of thousands of people at multiple points across Bangkok on Saturday, protesters painted a flag on the road with "Republic of Thailand" written across it. The writing was painted out overnight.

The Royal Palace has made no comment on the protests.

The government banned demonstrations in Bangkok on Thursday.

Across Thailand, demonstrations were being organised in at least 19 other provinces on Sunday. Solidarity protests were also being held or planned in Taiwan, Denmark, Sweden, France, the United States and Canada.

Protesters, who have adopted the fast moving tactics of Hong Kong activists, kept police guessing about where demonstrations would be held with a slew of social media posts.

Links have grown between protesters in thailand and Hong Kong in a so-called Milk Tea Alliance referring to drinks popular in both places. Hong Kong activist Joshua Wong tweeted in support of Thai protesters. 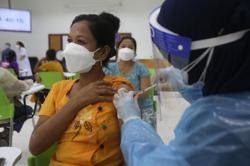