A mother’s love: Nasino sprinkling holy water on River’s coffin during funeral rites in Manila, while a photograph of River (inset) is placed beside her coffin before she is buried. — AP/Reuters

Jailed activist Reina Mae Nasino wanted to hold her three-month-old daughter for the last time before she was laid to rest but she could not.

Heavily armed prison officials guarding her refused to uncuff her despite pleas from her family and human rights supporters, who have decried what they described as inhumane treatment of Nasino and other mothers in Philippine jails.

“We were denied the chance to be together. I did not even see your laughter, ” said the 23-year-old Nasino, who was seen crying in front of her daughter River’s white coffin.

Even the priest officiating the mass also requested her escorts to remove the handcuffs so she can hug the coffin for the last time. The jail escorts did not budge.

Nasino could not hug her child. She made her final goodbye by touching the glass of baby River’s coffin. She could not even wipe her tears away being heavily clothed in PPE, rubber gloves aside from being handcuffed.

A local court granted Nasino a three-day furlough to attend the wake and funeral of her daughter.

Nasino, a member of the urban poverty group Kadamay, was arrested in November 2019 with two others for unlawful possession of firearms – charges she said were trumped up and part of a crackdown against left-leaning activists.

In April, she petitioned the Supreme Court to release her from jail on humanitarian grounds amid the coronavirus pandemic.

Nasino gave birth while in jail in July, but her baby was forcibly removed from her care and brought to Nasino’a mother in August, despite pleas that it is not healthy to separate a breastfeeding infant from her mother.

A month later, baby River started getting sick. She was transferred to the Philippine General Hospital from Manila Medical Centre after she had shown signs of Covid-19. She tested negative but her lungs failed and stopped responding to treatments.

On Oct 9, baby River’s doctor advised her family to give the mother the chance to see her baby alive for the last time. An urgent motion was filed. On that same day, the baby died at 8.50pm.

Wearing a full-body personal protective equipment suit while standing in the heat of the sun, Nasino told her baby: “I hope we will be the last to experience this.”

Dozens of placard-carrying protesters were prevented from marching from the funeral parlor to the cemetery, where only about 30 of Nasino’s relatives and friends were allowed in.

Interior Undersecretary Epimaco Densing III said that more law enforcers secured Nasino during the burial because her case had drawn public attention, but denied it was “overkill”.

He said the protective suit was used because of the pandemic.

The solemn occasion turned chaotic as police officers in camouflage uniforms dispersed the funeral procession and told the hearse carrying the coffin to speed up, forcing mourners to run after the vehicle.

“I thought we would have a proper burial with family and friends, but I was traumatised. My daughter nearly fainted while chasing the car, ” said Nasino’s mother, Marites.

“The government should treat Nasino the way it treated prominent politicians who were jailed and sought a furlough – and actually got longer reprieves for matters not related to life and death, ” Kapatid, a group of political prisoners’ relatives, said.

According to the group, giving Nasino enough time to grieve over the death of her baby River is the least the court can do after it struck down her bids to be allowed to attend to her daughter. — Agencies/Philippine Daily Inquirer/ANN 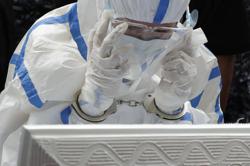