Motorists take shelter from heavy rain under a bus shelter on Jl. Sudirman in South Jakarta. - Indonesia's Meteorology, Climatology and Geophysics Agency has expected parts of the country to experience an anomalous intensity of rainfall in the near future. - The Jakarta Post/ANN

JAKARTA, Oct 17 (Xinhua): Indonesia's Meteorology, Climatology and Geophysics Agency has expected many parts of the country to experience an anomalous intensity of rainfall in the near future.

They include provinces of Lampung, South Sumatra, West Sumatra, Bengkulu, Riau, among others, head of the agency Dwikora Karnawati said on Saturday (Oct 17) after attending a virtual cabinet meeting.

On the La Nina phenomenon, Karnawati pointed out that in the October-November period, the phenomenon would affect most of the Indonesian areas except Sumatra.

"Although La Nina will not affect Sumatra, the intensity of monthly downpours is high as it could reach 400 millimeters per month occurring from the tip of Aceh province to the southern tip of Lampung province," she noted.

Indonesian President Joko Widodo has called on relevant authorities to anticipate and gear up for possible natural disasters and La Nina's impacts on various sectors in Indonesia.

"Impacts of La Nina on agricultural products should be well calculated. The same should also be done on the sectors of fisheries and transportation," the president told a cabinet meeting in Jakarta on Tuesday.

The Jakarta Post, reported that seven neighborhood units (RTs) in South Jakarta and West Jakarta were inundated after a heavy downpour in the capital on Friday afternoon.

“The flooding ranged from 10 to 70 centimeters in depth. Despite the flooding, no residents have taken shelter yet, ” Insaf said on Friday, as quoted by kompas.com.

In addition to the seven RTs, at least 19 roads in the city were flooded, including Pramuka in Matraman, East Jakarta, and Ciledug Raya in South Jakarta.

The Meteorological, Climatology and Geophysics Agency (BMKG) warned that torrential rain accompanied by lightning and strong winds would hit many parts of the country between Friday and Sunday.

The agency previously warned that the ongoing La Nina weather phenomenon could increase total precipitation in Indonesia by up to 40 per cent until February 2021.

La Nina, a periodic cooling of sea surface temperatures in the Pacific Ocean, tends to cause extreme weather in the archipelago. The BMKG has warned authorities that continuous extreme weather could result in flooding and landslides in many parts of the country. 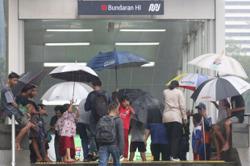 Agency: La Nina to cause heavy rainfall across Indonesia until February 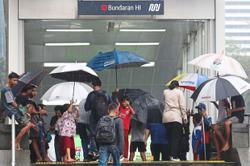 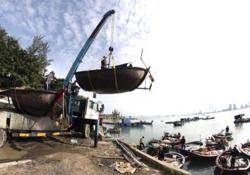