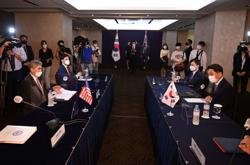 Ballistic behemoth: A screen grab taken from a KCNA broadcast showing what appears to be a new intercontinental ballistic missile during a military parade at Kim Il-sung square in Pyongyang. — AFP

Seoul: The gargantuan new missile North Korea put on show at a military parade is an explicit threat to US defences and an implicit challenge to both the current and next American president, analysts say, warning Pyongyang could test the weapon next year.

Leader Kim Jong-un watched the intercontinental ballistic missile (ICBM) roll through Kim Il-sung square – named after his grandfather – in Pyongyang at the climax of an unprecedented night-time parade on Saturday.

Analysts agreed it was the largest road-mobile, liquid-fuelled missile anywhere in the world, and was highly likely to be designed to carry multiple warheads in independent re-entry vehicles (MIRVs).

Jeffrey Lewis of the Middlebury Institute of International Studies said it was “clearly aimed at overwhelming the US missile defence system in Alaska”.

If the ICBM carried three or four warheads, he added on Twitter, the US would need to spend US$1bil (RM4.13bil) on 12-16 interceptors to defend against each missile.

“At that cost, I am pretty sure North Korea can add warheads faster than we can add interceptors.”

The missile was estimated at 24m-long and 2.5m in diameter, which specialist Markus Schiller said was big enough to carry 100 tonnes of fuel, which would take hours to load.

It is so big and heavy that it was practically unusable, he added: “You can’t move it fuelled, and you can’t fill it at the launch site.

“This thing makes absolutely no sense at all, except for threat equation games, like sending the message of ‘we now have a mobile ICBM with MIRVs, be very afraid’.”

North Korea watchers regularly caution the devices Pyongyang shows off at parades may be mock-ups or models, and there is no proof they work until they are tested.

But the missile was carried on an enormous and previously unseen 11-axle transporter-launcher, far larger than the eight-axle China vehicles the North employed before.

“The truck may be a scarier story than the missile,” said Melissa Hanham of the Open Nuclear Network.

“If the DPRK is producing their own chassis, then there is less of a constraint on the number of ICBMs they can launch.” — AFP