The day, Oct. 1, marked the first full year he arrived in Malaysia to work on the East Coast Rail Link (ECRL), a mega rail project of which CCCC is the main contractor. It was also the first Mid-Autumn Festival he spent overseas, away from his family in China.

The COVID-19 pandemic and the subsequent travel restrictions have caused difficulties for Liu and his colleagues to return to their respective families for the Mid-Autumn Festival, which symbolizes family reunion in China. But they all share a sense of responsibility to push forward the progress of ECRL during this time of difficulty.

"Due to the pandemic, it's not easy to bring in new staff to the site and the project is progressing continuously, so I can't think too much about taking a vacation myself," said Liu.

Arriving in Malaysia as a fresh graduate in civil engineering, Liu is now leading a team with Malaysian colleagues to build a 5.8-kilometer temporary road on an ECRL site in Malaysia's Terengganu state.

"The work is not complicated, nor it is easy," he said. As the road passes a swamp, Liu has to guide his colleagues so that the construction vehicles would not be trapped in mud.

He also takes on the responsibility to clean up the road to facilitate the movement of the vehicles. After a day of work, he would normally have walked more than 20,000 steps, based on the movement tracking app on his phone.

The approaching monsoon season in Malaysia with abundant rainfall is adding to Liu's sense of urgency. "I will have to get the temporary road ready ahead of the rainy season so that the following works would not be jeopardized," he said.

The first Mid-Autumn Festival Liu spent overseas was "memorable" for him. He tried to make mooncakes himself and shared them with his Malaysian colleagues, despite no large celebrating event being held due to the COVID-19 restrictions.

He also sent greetings to his family back in China via video calls and messaging apps.

"You would miss your family during such festivals. But I have many colleagues who also stay behind, so I didn't feel lonely," he said. "My parents care much about me, but they also understand that I have to stand fast and remain at my post at such time."

ECRL runs from Malaysia's largest transport hub Port Klang and travels across the peninsula to Kelantan state in northeastern Malaysia, which is expected to greatly enhance connectivity and bring more balanced growth to the country by linking its less-developed region on the East Coast to the economic heartland on the West Coast upon its completion in 2026.

The building of the project temporarily came to a halt earlier this year when the Malaysian government imposed sweeping restricting measures to slow the spread of the COVID-19 outbreak in the country, but the works resumed as soon as the restrictions were relaxed.

According to Bai Yinzhan, managing director of China Communications Construction in charge of the railway project, works have been started on more than 80 sites along the route, including on tunnel, bridge, and embankment.

"It's not easy to stick to the job during festivals like the Mid-Autumn," Bai said of his many Chinese colleagues who work on ECRL, "The smooth and safe progress of the project will be our best comfort." 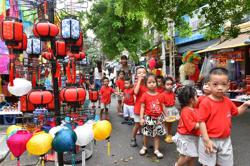