Tens of thousands of protesters join the anti-government rally on September 19 in Bangkok, demanding changes to the Constitution and reform of the monarchy.

BANGKOK, Sept 27 (The Nation/ANN) - The resignation of top Pheu Thai leaders in the last couple of days has bred speculation among some observers of a secret political deal to facilitate the return of former prime ministers Thaksin Shinawatra and Yingluck Shinawatra who are living abroad in exile.

Some observers believe the aim of the deal is to weaken the student-led protests calling for reform of the monarchy, besides their three main demands: rewriting the Constitution, ending the government’s crackdown on critics, and dissolving Parliament.

However, other analysts have dismissed the speculation as just wild rumour.

Academic Pavin Chachavalpongpun, who lives in exile in Japan, posted on his Facebook page that he did not believe the rumour of a deal between the Palace and Thaksin. He pointed out that Thaksin does not have much political bargaining power now. Pavin also insisted that the current anti-establishment protests were beyond Thaksin's sphere of influence.

Others speculated that Potjaman Damapong, Thaksin’s former wife, wants to reorganise the Pheu Thai Party and she want to take direct control via new executives of the party.

The resignation of the party's senior leadership, including chief Sompong Amornwiwat, come as anti-government protesters intensify their protests, with tens of thousands joining the rally in Bangkok on September 19. The protesters also marched to Parliament on September 24 to mount pressure on senators and government MPs who on that day voted to delay anendments to the Constitution. More protests are expected following Parliament's move to delay changes to the Constitution.

Sompong said the current structure of the executive committee did not support executive members in performing their duties effectively to achieve the policy goals.

Sompong, who is also opposition leader in the lower house, had said earlier that opposition politicians supported protesters' demand for changes to the Constitution, but did not support the call for reform of the monarchy due to the danger of widening the divisions in Thai society.

On Friday, Sudarat Keyuraphan announced her resignation as the party's chief strategist.

On the same day, four other members of Pheu Thai's strategic committee -- Kittiratt Na Ranong, Watana Muangsook, Phongthep Thepkanjana and Bhokin Balakul -- posted on their Facebook pages that they had quit the committee. Party deputy secretary-general Jirayu Huangsub posted on FB that he too had resigned from his position. 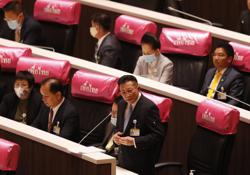