VIENTIANE (Vientiane Times/ANN): Electricite du Laos (EDL), the country's power corporation, is seeking to capitalise on the excess amount of electricity generated during the rainy season and is looking to sell it to more export markets.

Acting managing director of EDL, Chanthaboun Soukaloun, said that about 1,500MW of potential electricity generation was wasted by hydropower stations during the high-flow wet season.

But Laos has to import more electricity from Thailand in the dry season at a higher price, causing financial difficulties for EDL.

Chanthaboun revealed the challenges facing EDL when speaking to the media yesterday, before highlighting possible solutions to enable the company to move forward.

The meeting was chaired by Deputy Minister of Information, Culture and Tourism, Savankhone Razmountry and attended by representatives and journalists from various media organisations.

Laos and Thailand exchange electricity via EDL and EGAT. When Laos has a shortage of electricity because of population or business growth, it can source electricity from Thailand through its transmission lines.

EDL sells 1,000 to 2,000 million kWh to Thailand annually and imports a similar amount. The problem is that Laos sells power to Thailand for only 5 cents per kWh but buys power at 11 cents per kWh, adding to EDL’s debt burden.

Chanthaboun is looking at alternative sources of energy in a bid to minimise imports and help the company out of its financial quagmire.

He said Laos needs to diversify its sources of energy by developing solar and wind power plants and other sources to address the electricity shortage in the dry season.

Chanthaboun also said it was essential to build high-voltage transmission lines and find more markets for Lao electricity so the country could capitalise fully on its hydropower potential. It was also critical to look at how Laos could store water in the wet season in order to produce more electricity to compensate for the electricity shortage in the dry season.

The amount of power generated by EDL has grown rapidly while domestic usage has remained relatively stable.

Savankhone called on the media to act more responsibly and to gain an in-depth understanding of issues before reporting them to the public.

He said EDL and the media should work more closely together to ensure that the public better understood the Party and government’s policy surrounding the importance of energy for socio-economic development.

In 2016, EGAT signed a Memorandum of Understanding with EDL to increase the purchase of electricity from 7000MW to 9000MW.

When Laos is in need of electricity, Thailand sells power back to Laos which is transmitted through the same power lines.

As of January this year, Laos has been able to generate almost 5,000MW for export. Laos has signed electricity sales agreements with Thailand, Vietnam and Cambodia and is discussing the possibility of additional exports. - Vientiane Times/Asia News Network 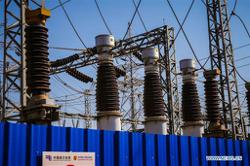