JAKARTA, Sept 19 (Xinhua): The Customs and Excises Office at the Soekarno-Hatta international airport in Indonesia's province of Banten has thwarted an exporter's attempt to smuggle 1.2 million baby lobsters to Vietnam, an official said.

The event occurred on Tuesday evening when the commodity was about to be loaded to aircraft, the office's public service head Finari Manan told journalists on Friday.

The official pointed out that the office, local police and a quarantine center found a manipulation of data on the number of the baby lobsters which were about to be exported.

By foiling the smuggling effort, the office managed to avoid a state loss of 1.2 billion rupiahs (US$81,239 ), the official said, adding that the baby lobsters are now still under treatment by the Indonesian Lobster Entrepreneurs Association.

In another development in the country, a 5.2-magnitude earthquake jolted 152 km WNW of Tobelo, indonesia at 18:43:26 GMT on Friday (Sept 18), the US Geological Survey said. 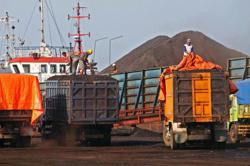