A Vietnamese court sentenced two villagers to death in the killings of three policemen during a clash over a land dispute, state media reported. Twenty-seven other villagers received sentences of up to life imprisonment.

The newspaper Vietnam News said half brothers Le Dinh Cong and Le Dinh Chuc received the death sentences for their roles in burning the three policemen to death in the village in a suburb of Hanoi in January.

The 84-year-old father of the two men, village elder Le Dinh Kinh, was fatally shot during the violence, it said.

The newspaper said four other defendants were also charged with murder. Of them, Cong’s son, Le Dinh Doanh, was sentenced to life imprisonment while three others were given jail terms ranging from 12 to 16 years, Vietnam News said.

The defendants were accused of killing the three policemen using grenades, firebombs and spears as the authorities advanced on the village in Dong Tam commune.

The police were trying to stop the villagers from blocking the building of a wall around a military airport on land they said belonged to the village.

The newspaper quoted the judge as saying in the verdict that the assailants carried out the murders in a brutal way and used methods for mass killing.

The 23 other defendants were accused of “opposing those who are on public duties” and received sentences ranging from 15 months to six years, the newspaper said.

Land disputes are common in Vietnam because the government does not recognise private land ownership. Land can be taken for infrastructure and investment projects, and disagreements over compensation often lead to prolonged disputes.

“The heavy sentences against the defendants, including the death sentence against two persons, come as no surprise,” said Phil Robertson, Asia deputy director for New York-based Human Rights Watch.

“Vietnam’s rulers are bending over backwards to show their toughest possible face against the villagers because they worry this community’s defiance could be contagious unless Dong Tam villagers are hit with the most severe penalties,” he said. — AP 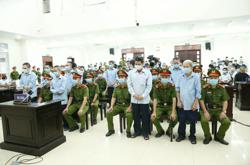