HONG KONG (AFP): Asian stocks edged up Wednesday (Sept 16) but investors trod a cautious path following a broadly positive start to the week, with focus on the outcome of the Federal Reserve's latest policy meeting.

Markets have enjoyed something of a respite from the roller-coaster ride seen earlier in the month, which saw a rout of previously surging technology firms, as vaccine hopes and upbeat economic data offset worries about fresh virus spikes and new containment measures.

But eyes are now on the Fed. With US lawmakers unable to agree on a new stimulus package -- despite the first running out last month, leaving millions of Americans struggling -- the onus has fallen on the central bank to do much of the leg work in supporting the world's top economy.

And while officials are not expected to unveil any fresh measures, having already indicated they will keep interest rates near zero for the foreseeable future, boss Jerome Powell's post-meeting comments will be pored over for an idea about the outlook and clues to future policy.

The bank "is likely to emphasise a decidedly low rate outlook for years to come to help nurse the world's biggest economy back to health after a record contraction", said Joe Manimbo of Western Union Business Solutions, referring to the second quarter's contraction of more than 30 per cent.

But National Australia Bank's Tapas Strickland warned stocks could suffer a pullback if investors were disappointed by the outcome.

"There is a risk the market is underwhelmed by the guidance provided by the Fed," he said in a commentary.

"There is some expectation that with the US Congress unwilling/unable to agree to a new fiscal package, monetary policy may need to step in to fill the void. Accordingly, markets will be focused on any changes to forward guidance and to any balance sheet adjustments."

Sydney rallied 0.8 per cent, while Tokyo, Hong Kong and Singapore were in positive territory after swinging through the morning. There were also gains in Wellington and Taipei though Shanghai, Manila and Jakarta were down.

There was little reaction to the World Trade Organization's decision to uphold a Chinese complaint over additional US tariffs on around US$250 billion of imports, which was slammed by Washington.

US Democratic House Speaker Nancy Pelosi on Tuesday (Sept 15) announced a new attempt to break weeks of deadlock with the White House and Republican-controlled Senate on passing a new stimulus package.

"We are committed to staying here until we have an agreement," she said on CNBC, adding that she was "optimistic that the White House, at least, will understand that we have to do some things".

But with both sides miles apart on their proposals -- Democrats are aiming for $2 trillion and Republicans want to spend half of that -- there is little expectation a deal can be made any time soon.

"It may have to happen after the election, because there obviously are politics involved. This is Washington." Republican senator John Thune said, adding that "the clock is running out".

Morgan Stanley warned that failure to pass a fresh package would delay by six months the return of the stuttering economy to pre-pandemic levels of activity. 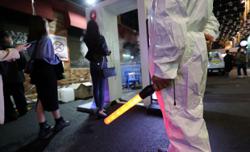