Up the river: Pemberton being escorted by police after arriving at Camp Aguinaldo after his conviction in this file photo. — AFP

THE Philippine president pardoned a US Marine in a surprise move that will free him from prison in the 2014 killing of a transgender Filipino woman that sparked anger in the former American colony.

President Rodrigo Duterte said he decided to pardon Lance Cpl Joseph Scott Pemberton because the Marine was not treated fairly after opponents blocked his early release for good conduct in detention.

Human rights group, Karapatan, immediately condemned the pardon as a “despicable and shameless mockery of justice and servility to US imperialist interests”.

Pemberton was convicted of homicide and had been serving six to 10 years in prison for the killing of Jennifer Laude in a motel in Olongapo city.

His lawyer, Rowena Garcia-Flores, said that Pemberton was already aware of Duterte’s decision when she called him.

Meeting Pemberton in detention a few days ago, she said he expressed his willingness to apologise to the Laude family even belatedly.

Pemberton would likely be removed from the Marines due to his conviction and plans to work in the US, Garcia-Flores added.

Presidential spokesman Harry Roque, who once served as a lawyer for the Laude family, said the pardon would mean Pemberton’s immediate release.

“The president erased the punishment imposed on Pemberton. What the president did not erase was the conviction of Pemberton. He’s still a killer, ” Roque told reporters.

Duterte is one of the most vocal critics in South-East Asia of US security policies, but on Monday he said, “If there is a time where you are called upon to be fair, be fair.”

Roque said the Department of Justice was planning a separate appeal.

The court order rekindled perceptions that US military personnel who break laws can get special treatment under the allies’ Visiting Forces Agreement, which provides the legal framework for temporary visits by US forces to the country for large-scale combat exercises. — Philippine Daily Inquirer/ANN 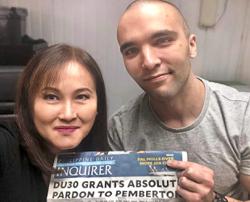 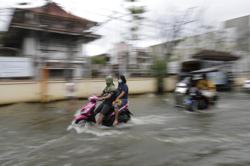