BANGKOK, Sept 4 (Bernama): The Thai government plans to spend 45 billion baht (about US$1.4 billion) on cash handouts to 15 million people affected by the economic fallout caused by Covid-19, which is expected to boost domestic consumption.

Deputy Secretary-General of the Office of the National Economic and Social Development Council, Danucha Pichayanan said on Wednesday that a meeting of the Centre for the Administration of the Economic Situation Affected by Covid-19, approved the cash handouts as an economic stimulus measure proposed by the Finance Ministry.

Under the measure, the government will give 3,000 baht cash handouts to people to buy consumer goods.

They are required to register for the cash and the money will be transferred through the e-wallet, Danucha said.

The Finance Ministry will prepare details of the cash handouts scheme to present to the centre again and the measure is expected to be implemented from next month until the end of the year, he said.

The measure is expected to stimulate cash flow of about 90 billion baht in the economy and boost the economy by 0.25 per cent, he added.

Meanwhile, the Centre for the Administration of the Economic Situation Affected by Covid-19 also approved the Labour Ministry's request for 23.47 billion baht to hire new graduates.

The 23.47 billion baht will come from the 400-billion-baht loan borrowed by the Finance Ministry to tackle the economic effects of the pandemic.

The minister said the project was the right solution to the unemployment problem faced by new graduates.

The second part of the project is the "Thailand Job Expo 2020" job fair tentatively scheduled to take place at the end of this month.

Around one million positions in the public and private sectors will be available at the event.

The Nation Thailand, meanwhile, reported on Friday that the Covid-19 Centre reported four new cases over a 24-hour period on Friday (Sept 4).

The man lived in a condo in Bangkok’s Bang Mod area and worked as a DJ in Rama III and Rama V areas before being caught.

As of Friday, total patients were 3,431 since the outbreak, of whom 3,277 have recovered while 96 patients are in hospitals.

The death toll remains at 58.Globally, as of 9am on Friday, the number of confirmed cases since the outbreak has passed 26.4 million. Of these, 18.6 million have recovered, 60,749 are in severe condition and 873,108 have died 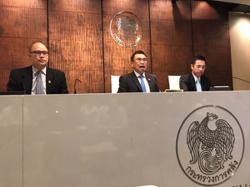