Chinese and Indian troops faced off again on the southern bank of Pangong Tso, another disputed area, on the night of Aug 29-30 raising further tension between the two countries. - AP

After the deadly clash in the Galwan Valley in the western sector of the disputed Sino-Indian border on June 15, Chinese and Indian troops faced off again on the southern bank of Pangong Tso, another disputed area, on the night of Aug 29-30. Which has further raised tensions between the two countries.

Contrary to the Indian government's claim of "provocative military movement" by China to "expand the area of the border row", the face-off is the result of Indian soldiers' incursion into the Chinese side of the Line of Actual Control and violation of the agreements reached at the ongoing talks between the two military commanders over disengagement and de-escalation of troops along the border.

In fact, Indian media reports on the latest face-off say Indian soldiers took "preemptive steps" to thwart Chinese troops' attempts to occupy strategic points, which show that it is India that has violated the agreements for disengagement and changed the status quo on the ground.

Given the new round of blame game, one is prompted to ask why the tensions on the Karakoram Mountains have escalated in past few months despite decades-long efforts of both Beijing and New Delhi to keep their border peaceful.

The simple answer can be found in India's construction of an all-weather military road along the disputed border.

For China, this is an attempt by India to change the status quo and balance of military power along the disputed border in its favour.

Yet a broader answer may be found if we look at the big picture of bilateral relationship and beyond. The border tension is not an isolated incident, rather it should be seen as the fallout of the intensified geopolitical competition in the Indo-Pacific region.

Thanks to the US administration's frontal attack against China -- exploiting the Taiwan question, South China Sea issue and the trade war -- Sino-US relations are in free fall.

In this context, India, which initially avoided taking sides between China and the United States, has been moving closer to the latter.

On issues such as the border disputes with China, India expects to get support from the US and therefore is slowly aligning with the US. In other words, India is trying to take advantage of the Sino-US rivalry to strengthen or even expand its occupation and control in the disputed border areas.

With new diplomatic support and military equipment from Washington, Indian Prime Minister Narendra Modi, leader of the Hindu nationalist Bharatiya Janata Party (BJP), has become more assertive and is pushing forward the BJP's agenda to strengthen border security, which his party promised to do to win the 2019 general election.

The assertive approach is also a way for Modi to maintain his "strong-man" image among the Indian electorate, which sees him as a leader who can boost India's economic growth and transform the country into a "great power".

Yet India's growth rate has been volatile during his tenure, much less what he promised and the Indian people expected.

Worse, the novel coronavirus outbreak, and with the lockdowns and other strict measures adopted to control and prevent the spread of the virus have caused the Indian economy to shrink by a historic 23.9 per cent in the April-June quarter.

In addition, India accounts for more than 3.76 million coronavirus infections, third-highest in the world, - and over 66,300 deaths - with the daily increase of cases being between 60,000 and 80,000 over the past few weeks.

It has surpassed the US in terms of highest single-day spike in cases. As such, many economists have forecast a downward trend for the Indian economy in the coming months.

Under such damaging circumstances, Modi believes he can remain popular in the country only by acting tough on issues such as border disputes.

Yet history tells us that boosting a country's economy and consequently enhancing the national strength - not making dangerous moves that could cause instability or lead to conflicts with other countries - are better and more tangible ways to strengthen border security.

The priority for China and India both is still economic development, and they need a peaceful neighbourhood to facilitate development.

China, too, is facing economic difficulties due to Covid-19 pandemic, floods in the southern part of the country and the deteriorating geopolitical environment, even though the Chinese economy rebounded in the second quarter to register 3.2 per cent growth.

A tranquil border is critical for Beijing and New Delhi to realise their respective economic goals.

Fortunately, the two governments have expressed their determination to resolve the border disputes through diplomacy.

Indeed, even in the wake of the high tensions, China and India have maintained multilevel -- diplomatic and military -- dialogues.

Right after the Aug 29-30 face-off, the two sides held a brigade commander level flag meeting at Chushul in an effort to resolve the disputes.

Yet settling the border disputes is a tough task for both sides as the disputes entail sovereignty and territorial integrity.

Nonetheless, management and control of disputes are direly needed at this stage given the recent unprecedented military infrastructure buildup and the deadly June 15 clash after decades-long tranquillity along the Line of Actual Control.

Both sides' militaries need to exercise more restraint along the disputed border in order to prevent further clashes and put Sino-Indian relations back on the right track. And, as two ancient civilisations, they should apply all their wisdom to overcome the current difficulties. - China Daily/Asia News Network 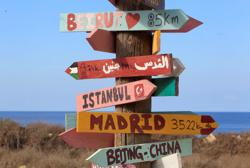