Two men rest under the shade from the hot weather while queueing for cash subsidy from the government amid the coronavirus outbreak, in Batasan Hills, Quezon City, Metro Manila. The number of confirmed Covid-19 cases in the Philippines surged to 217,396 after the Department of Health (DOH) reported 4,284 new daily cases on Sunday. - Reuters

MANILA, Aug 30 (Xinhua): The number of confirmed Covid-19 cases in the Philippines surged to 217,396 after the Department of Health (DOH) reported 4,284 new daily cases on Sunday.

The DOH said that the number of recoveries surged to 157,403 after it reported 22,319 more patients have survived the disease.

The death toll also rose to 3,520 after 102 more patients have succumbed to the viral disease, the DOH added.

It is the fifth consecutive day that daily casualties from the coronavirus disease in the South-East Asian country have surpassed 90.

Metro Manila topped the five regions or provinces with the highest number of daily confirmed cases reported on Sunday with 2,207.

Meanwhile on Saturday (Aug 29), three people were killed, including a soldier, and seven other soldiers wounded when government forces clashed on Saturday morning with some 30 Abu Sayyaf fighters in the jungles of Sulu province in the southern philippines, the military said.

He said the troops also recovered two high-powered firearms from the fleeing terrorists.

Gonzales said troops were pursuing the group that carried out the Aug 24 twin suicide bombing attacks in Jolo, the capital of Sulu that killed 15 people and wounded 74 others. Soldiers and policemen were among the casualties.

Jolo has long been a base for the Abu Sayyaf terrorist group.

The Abu Sayyaf Group is a loose band of violent extremist groups in the southern philippines. The group, with an estimated 400 members, is active in the impoverished island provinces of Sulu and Basilan. 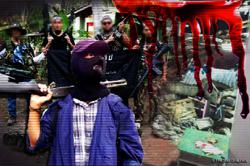