'I had to do it': student leader defies Thailand's royal taboo

Student Union of Thailand spokesperson Panusaya "Rung" Sithijirawattanakul reads a list of demands, including the abolition of the kingdom's royal defamation law, during a pro-democracy rally at Thammasat University in Pathum Thani, north of Bangkok. When university student Rung calmly read out 10 demands to reform Thailand's monarchy before thousands of protesters at a pro-democracy rally this month, she defied the country's biggest political taboo. - AFP

Backed by an arch-royalist military and shielded by draconian royal defamation laws, the super-rich monarchy wields enormous influence in nearly every sphere of Thai society.

But 21-year-old Rung -- real name Panusaya Sithijirawattanakul -- said the August 10 protest at Thammasat University outside Bangkok was "the right time" to ask for change, even though she risked arrest.

"When I left the stage, I felt like I had expanded the boundaries... raised the limits on how people can talk about the monarchy," the bespectacled sociology and anthropology student told AFP.

That demonstration was one of many near-daily rallies -- some drawing thousands -- across Thailand as the democracy movement gathered steam, led by university students like her.

The demands Rung announced that day included more transparency for the royal family's fortune and the abolition of the royal defamation law, which carries a sentence of up to 15 years in jail per charge.

Born 1998 in Nonthaburi to a middle-class family that runs an auto workshop, Rung said she grew up largely unaware of political developments but one incident stood out.

When she was 10, her entire neighbourhood was ushered out onto the streets to wait for a royal motorcade to drive past.

"I remember thinking: 'Why did I have to go? Why did they have to force me and other people to kneel down?'"

"This was the incident that marked my conscience."

"Soldiers don't have the authority to rule the country and everything broadcasted then was propaganda," she told AFP at her university dorm. 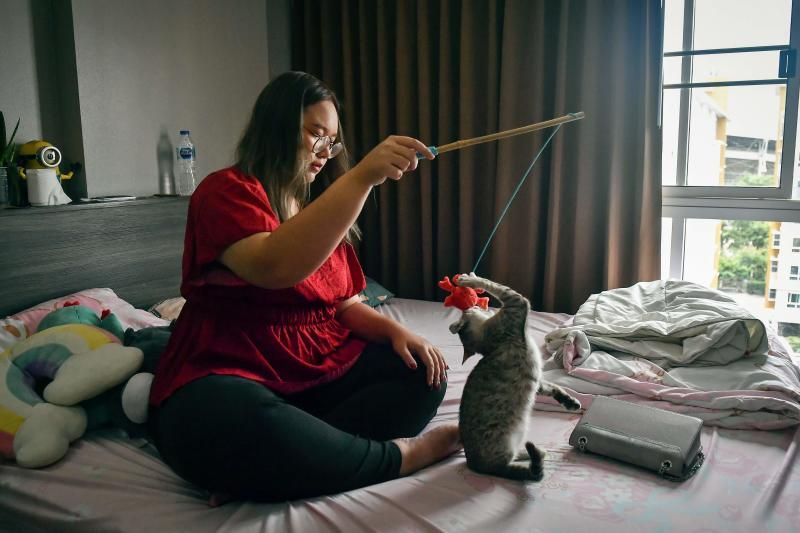 Panusaya "Rung" Sithijirawattanakul playing with her cat in her dorm room at Thammasat University in Pathum Thani, north of Bangkok. - AFP

Inspired by the Hong Kong democracy protests, Thai activists are calling for a complete overhaul of the government of Premier Prayut Chan-O-Cha, a former army chief who led the 2014 coup.

To the current protesters, Prayut's administration is emblematic of a putsch-happy military entrenched in the country's political establishment long perceived to serve only the elite.

Sitting at the apex of power is King Maha Vajiralongkorn. Since he ascended the throne in 2016, he has made unprecedented changes to the institution.

He has taken personal control of the palace's fortune, worth an estimated $60 billion, and also moved two army units under his direct command.

The burgeoning youth-led movement wants changes "meant to sustain the monarchy in a way that is adapted" to the modern world, said Rung.

On Wednesday, activists submitted the demands to a parliamentary committee -- a move that does not guarantee discussion among MPs but symbolises the group's resolve.

"It's about equality," Rung stressed.

"No one should be more important or higher than anyone else."

- 'My life would change forever' -

But speaking out comes at a cost.

At least nine pro-democracy activists who fled Thailand since the 2014 coup have disappeared in the past two years, according to Human Rights Watch.

And while the royal defamation law has not been used against any of the activists charged so far, authorities have hit Rung and other student leaders with multiple charges, including sedition.

That carries a maximum sentence of up to seven years in jail.

Prayut has claimed their demands are unacceptable to the country's majority, and on Wednesday warned that Thailand would be "engulfed in flames" if protesters push too far.

Some analysts -- and even student leaders themselves -- have recalled the events of 1976, when students protesting the return of a military dictator were shot, beaten to death and lynched by state forces and royalist mobs.

For now, Rung faces legal threats and could be arrested. But she says she is "ready" for what comes next.

She continues to travel to rallies outside Bangkok to make speeches, and helps organise future gatherings in encrypted message groups.

"I knew that after I read out the 10 demands, my life would change forever," the soft-spoken activist said as she played with her kitten.