Chinese FM: A 'new Cold War' will reverse the course of history

Wang made the remarks at a press briefing here with Italian Foreign Minister Luigi Di Maio after their talks.

In Wang's view, such an attempt "is against the world development trend. And I think countries in the world are not going to be behind this mentality. Instead we are going to join hand to oppose anyone who is trying to drag us back into that 'law of the jungle'."

With Di Maio by his side, Wang said China and Italy should work together to plan for the development of Sino-Italian relations in the next 50 years.

He attributed the steady and healthy development of Sino-Italian ties in half a century to three factors.

Firstly, as representatives of Eastern and Western civilisations, China and Italy always appreciate and learn from each other, respect the development path chosen by the people in the other country, and support each other's legitimate concerns on issues of core interests.

Secondly, as major economies in the world, both China and Italy have always adhered to the policy of opening up and developing mutually beneficial and win-win relationships. 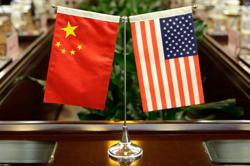 Geopolitical Cold War with China would be dreadful mistake, warns US economist