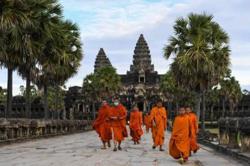 Workers in the Cambodian Cultural Village resort protest unpaid wages in front of their workplaces on Aug 24, 2020. - Photo supplied

The workers gathered to renew their protest at the well-known tourist destination after they agreed to stop during the replacement Khmer New Year Holiday. The first protest occurred on August 14.

Worker representative Lim Sopha said they are demanding that employers return to the negotiating table with trade unions honestly, retain the artistic office and the roles of workers who work at the office, and pay back wages and a daily $25 food allowance which the company cut.

Im Chamroeun, the deputy head of the provincial Department of Labour and Vocational Training, told The Post on Monday that negotiations on Monday did not yield results.

“We still have not had any solution yet because today we met with one side first and on Tuesday, we will meet with both sides [workers and employers]. We don’t have confidence in this negotiation yet. Let’s wait and see, ” he said.

“What we demand proves beneficial to workers, especially women, because the Cultural Village consists mostly of women employees, ” he said.

Neither Cultural Village general manager Lim Sopheak nor his deputy Touch Socheat could be reached for comment on Monday.

But in an interview with Fresh News, they said the company had no intent to delay negotiations. They said the workers and employers have met for talks on several occasions, but none of them have agreed to a solution.

“From the onset of the spread of Covid-19, Cambodia and the world alike have suffered a severe impact on the tourism sector. The Cambodian Cultural Village resort has also suffered a financial crisis because of a decline in national and international tourist arrivals.

“But to avert complete business closures and retain the work of workers, the company offers to find a solution for the more than 300 workers who experience the most difficulties, ” they said.

Sopheak and Socheat said the company had tried to address workers’ salaries rather than suspend their work. The firm had met with the division head and all workers to discuss providing 80 per cent of their salaries and reducing working hours by 20 per cent for workers who have salaries under $200. - The Phnom Penh Post/Asia News Network