Cambodia: The rise and fall of Pub Street, the most notorious party strip in the country

Just a handful of visitors populate Pub Street in Siem Reap, Cambodia, on a recent evening – a far cry from the busy crowds and hedonistic atmosphere of the party strip just eight months ago. - Jorge Rodriguez/SCMP

PHNOM PENH, Aug 17 (SCMP): It’s midnight on a Friday in what should be the peak summer season on Cambodia’s most renowned nightlife strip, in the north-western city of Siem Reap. Garish red signs overhead proclaim “Pub Street” but elsewhere the road is in near-total darkness.

The atmosphere is ghostly, with barely a soul visible save for a few shadowy figures making their way home. The lights of the occasional tuk-tuk pierce the gloom, the drivers emerging from the half-light to offer rides to uninterested passers-by.

Closed is a row of establishments that includes the recently burgled Angkor What? Bar – Pub Street’s first bar and Siem Reap’s most infamous backpacker haunt – and The Red Piano, a classier affair that was patronised by Angelina Jolie in 2001, during the filming of Lara Croft: Tomb Raider.

The only nightspot open on Pub Street proper is the Temple Club – another long-standing tenant and the area’s most popular dance venue – where two dozen revellers jostle to the frantic strains of EDM, trying defiantly to recreate the heady clubland whirl of the carefree days before the coronavirus struck.

Although Covid-19 has left Cambodia relatively unscathed disease-wise – to date, fewer than 300 cases have been recorded, and no deaths – Siem Reap’s tourist industry has witnessed a dramatic decline.

Visitors to the Angkor Archaeological Park, the town’s marquee attraction, have plummeted by as much as 98 per cent; Khmer New Year was postponed; and Siem Reap became a ghost town when flights were banned from the United States and countries in Europe.

Many Pub Street restaurants closed voluntarily, pre-empting a catastrophic reduction in business, while others prepared takeaway or delivery meals only.

In mid-March, entertainment venues, including bars, were ordered to shut, though some remained open by serving food, a loophole that allowed drinking dens to stay afloat. Although the area was reopened in June, there has been little sign of recovery on a strip that only eight months ago was abuzz with the hedonism for which it became notorious during the 2010s.

The pandemic has exposed Siem Reap’s over-reliance on the tourist dollar. The hospitality industry’s sudden breakdown has seen thousands of workers lose their jobs in one of the kingdom’s poorest provinces.

But Pub Street is also falling victim to another development; one that has been in the making for longer than just a few months. 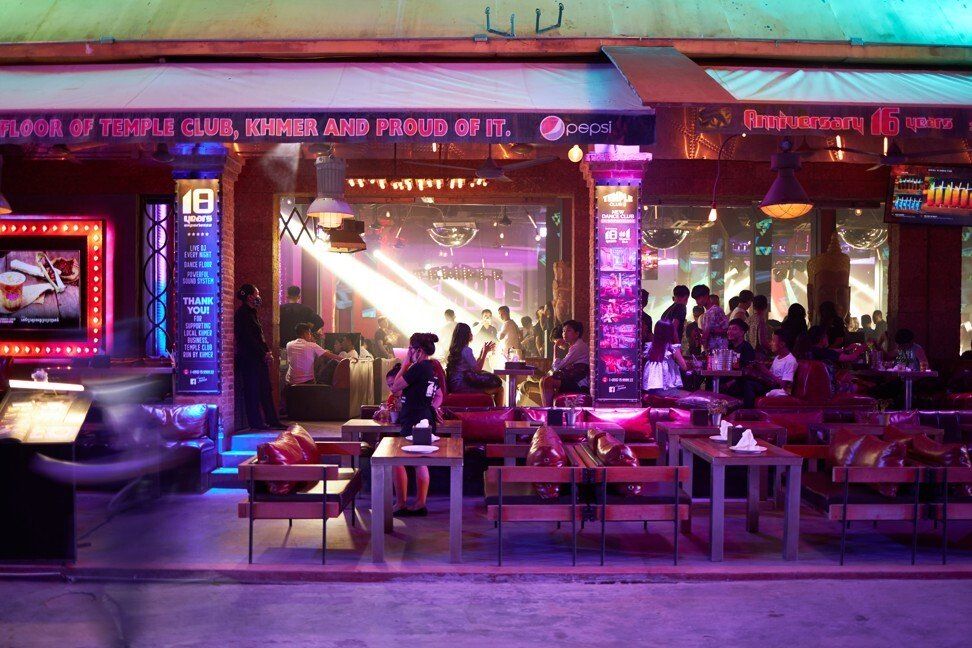 Temple Club, a long-running nightclub on Pub Street, but with only fraction of guests it used to have during the pre-Covid-19 days. - Jorge Rodriguez/SCMP

Pub Street’s expansion mirrored Siem Reap’s own transformation, from a low-key destination beloved by middle-aged travellers to a bustling city targeted by young backpackers. The degradation of the strip was evident to anyone wandering the area in daylight, though. Slapdash building design and a lack of long-term vision had resulted in an ungainly architectural hodgepodge.

It was a look that reflected the no-frills ethos of this noisy party zone, with its fishy foot massages, booze-party cyclos, tarantula snacks and one-dollar beers. Dancers revelling bare-chested outside nightclubs completed the scene.

“About four years ago, shops were popping up without paying any rent,” says Saryroth Chan, head of dining-excursion company DineBeyond. “They played very loud music, just bombing each other. You couldn’t run a business around there. They should have been asking for proper permission from the tourism ministry so that we could all run a proper business.”

When Miss Wong decamped south of the Siem Reap River last month, it was hard not to see its relocation as a metaphor for the deterioration of Pub Street. It also affirmed what residents have known for years: the area surrounding Wat Bo Road, with its galleries, boutique hotels and hip restaurants, has become the city’s new capital of cosmopolitan cool.

Although Pub Street’s future might appear bleak, characterful venues doing their best to keep the scene vibrant can be found hidden in the two alleys that run parallel to the main drag: The Lane and Alley West, to the north and south, respectively.

All are struggling to survive Covid-19 but some are at least able to draw a Friday night crowd from Siem Reap’s foreign residents, who have always preferred these hideaways to touristy Pub Street. Cambodian revellers are a rarer sight. 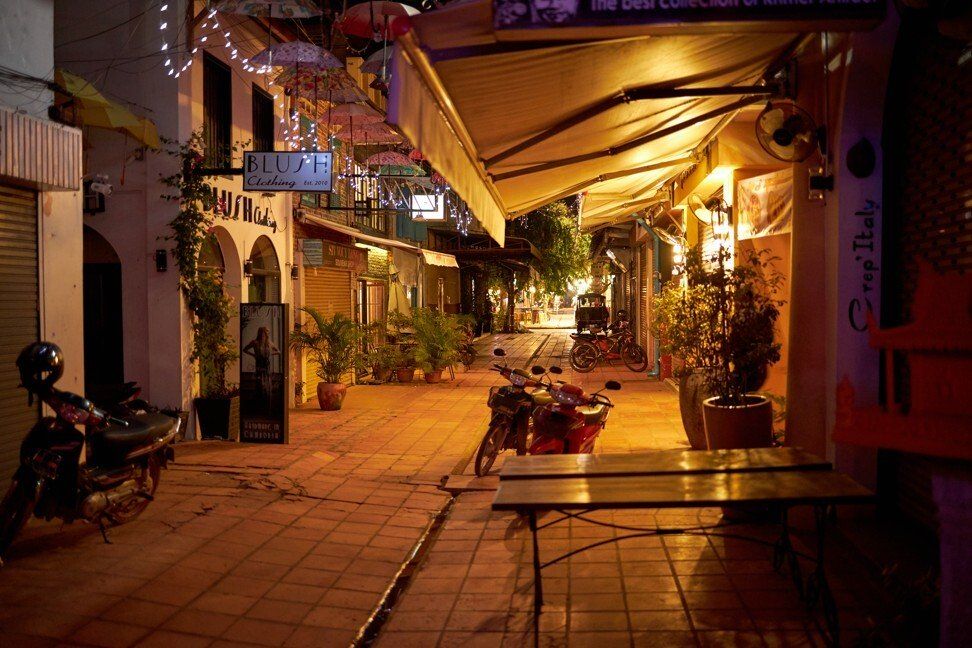 Alley West, with its artisanal ice cream parlours, chic boutiques and colourful umbrellas suspended over the pavement, is seeing a mini-renaissance thanks to Bar 43, a glamorous bolt-hole that opened in June. The bar’s Hawaiian-shirt-wearing owner, Amine Stambouli, hails from Paris but has lived in Cambodia for 10 years.

With a friend, also called Amine, Stambouli infused the space with a stylish design, tiki-style drink presentation and a good-humoured vibe (being opposite the Picasso Bar doesn’t hurt). The bar is striking even from the outside, with its vivid royal blue facade and porthole-style windows, but inside a wraparound leather sofa, extravagant drinks cabinet and avant-garde lighting exude an ambience that’s rare in the wider Siem Reap, let alone Pub Street.

The Menaka Lounge, meanwhile – located near the Old Market, its “secret” entrance in a dimly lit alleyway – is an establishment that in any major city would be a roaring success. Its scarlet interior, a love letter to Cambodia lavishly decked out with iconography from the kingdom, sets the scene for intimate gatherings for its small, but loyal, clientele, who sup cocktails designed to represent the country’s history.

The Lane is home to businesses of an older vintage, and despite Miss Wong’s departure, the mood remains upbeat. Asana, with its charming wait staff, is a traditional wooden house with stuffed rice sacks for seats and cocktails served in teapots.

At Nobushi, a bohemian Japanese izakaya that moved here in May last year, chef-server Yuichiro Hamasaki – a blues aficionado – doesn’t seem remotely worried about the drop in custom. With smiling eyes and a friendly demeanour, he’s more than happy to treat occasional guests to music videos on a large TV screen while his enormous retriever sits patiently waiting for walkies.

In the small hours, the tranquillity along The Lane is shattered by the music emanating from Silk Garden. This casual haunt, sandwiched between Asana and Nobushi, doesn’t come with grand pretensions but its open-air layout, theme nights and seclusion have made it a popular party bar during the pandemic.

It’s at Silk Garden that a motley group of coronavirus refugees – stuck-in-transit travellers and resident foreigners – congregate in these uncertain, dislocated times. For if this really is the end – of travel, of our life plans, of Pub Street itself – then this back-alley bar is as convivial a venue as any in which to mark the occasion. - The South China Morning Post
Article type: metered
User Type: anonymous web
User Status:
Campaign ID: 1
Cxense type: free
User access status: 3
Join our Telegram channel to get our Evening Alerts and breaking news highlights