SINGAPORE (The Straits Times/ANn): Singapore may consider introducing reciprocal green lanes at Changi Airport for tourists from countries where the Covid-19 situation is similar to or better than that in Singapore.

This means leisure travellers from such a country will be exempted from having to serve a 14-day quarantine on arrival, and vice versa.

Transport Minister Ong Ye Kung suggested the arrangement as a way to help lift the passenger numbers at Changi to about 40 per cent of pre-Covid levels.

"Serving 14 days in isolation is a major deterrent to travellers, and we may have to consider replacing this with a rigorous testing regime," he said in his maiden speech to the staff of his ministry, to which he was appointed last month (July 25) in a Cabinet reshuffle.

Ong also said Singapore could explore letting tourists from countries or regions which have kept the virus under control to fly into Singapore even when they bar Singaporeans from entering there.

Currently, Singapore has reciprocal fast-lane arrangements at the airport for visitors from China and Malaysia on business and official trips. For instance, those from China travelling to Singapore must do a Covid-19 swab test 48 hours before departure and after they land, among other conditions

Similar agreements are in the works with countries like New Zealand, which, however, saw a surge in infections recently.

While these possibilities will help lift the airport and aviation sector out of its worst crisis in history, Ong also underlined the need for the same enterprise Singapore had in its early days that led to the creation of not just the air hub but also its port.

In his National Day address, Ong painted, in broad strokes, the growth of Singapore's transport, especially its global connections by sea and air, which can be traced largely to Singapore's geographical location.

"But geographical endowment is not enough because the road we travelled since then is not made by nature but carved by hand," he said.

A few generations of Singaporeans worked hard as they seized the maritime opportunities that, over the years, led to the rise of various hubs, including in aviation, finance and infocomms, he noted.

Singapore port is the world's No. 2 in terms of cargo volume, a spot it held for nearly 50 years.

On land,"the MRT map today is as tight and as comprehensive as many advanced European cities", the minister said.

And Changi Airport is among the top, if not the top, in the world.

Then Covid-19 slammed the world this year.

The damage to Changi is crippling.

It was the world's seventh busiest airport in terms of international passenger traffic. Daily, it had more than 1,000 plane movements.

Today, it is in 50th position, with just 150 plane movements.

"We have started to serve transfer and transit passengers, but even at its peak, they accounted for at most a third of total Changi passenger traffic."

"As colleagues from Changi Airport told me, Covid-19 set us back by at least 40 years, to 1981 when Terminal 1 first opened," the minister said.

It was a time when airlines had not decided on flying to Singapore. "We went all out... to invite the carriers to Changi.

"Today, the airlines are here, and Changi has grown into a world-class airport," he noted.

"Our challenge is to restore passenger volume, while keeping virus transmission under control. The circumstances are different, but we need the same hunger and enterprise as we had in the early 1980s."

But Covid-19 did not have as devastating an impact on the sea port.

Meanwhile, Ong gave no hint of a slowdown in the construction of Tuas port.

This, despite recent suggestions, including a recent letter to The Straits Times Forum page saying there could be a need to "recalibrate the construction of this port by perhaps slowing it down by a few years or even scaling the project down" as Covid-19 reduces sea trade.

Set to be operational in the 2040s, the Tuas port will handle up to 65 million 20ft equivalent units every year.

Even as PSA is anticipating a drop in volumes this year, it will respond nimbly to capture new opportunities in areas such as e-commerce, and investing in its competitive advantage, Ong said.

While geography has played a crucial role, the Singapore Port has thrived also because of the opportunities seized along the way.

"We built on our dynamic port and generated many other complementary industries, in shipping, ship finance, marine insurance, maritime legal, maritime logistics," he said.

Today, each main haul ship that arrives in Singapore typically transfers its containers to 100 other ships, before taking on containers from another 200 ships.

"So, each main haul ship calling at Singaporere presents 20,000 connections. This is what it means to be an interchange of the sea," Ong said.

It costs a lot to maintain and operate Singapore's land transport -- especially the MRT system -- but an attractive public transport system brings about "a greener, fairer and better Singapore", Ong said.

"We are devoting a lot of resources to land transport," Ong said. "It also costs a lot to maintain and operate the system, and renew ageing operating assets."

"Fare revenue is insufficient to cover these operational expenses."

Government has been spending $2 billion every year to subsidise the running of the public transport system," he said.

But an attractive public transport system will help Singapore move towards a car-lite nation, said the former education minister.

Especially significant is the vast improvement in train service reliability in the recent years - "a clear sign that we have turned the corner", Ong said.

Today, the ratio has flipped, resulting in trains being more reliable, clocking over a million train-kilometre travelled between each breakdown that lasts longer than five minutes.

As a new world order reshapes Singapore, Ong turns to Changi Airport again to make his point on the unyielding truths for the country's continuing status as an air and sea hub.

He recounted visiting Terminal 2 on his second day on the job and being greeted by withered bougainvillea plants -- a far cry from the lush blooms that line the entrances to the departure hall.

The reply: Terminal 2 is closed, and they had to save costs, including on plant maintenance. "But bougainvilleas are hardy, and they will live," he was told.

He did what a gardener friend had told him: he scratched a plant and underneath its dried brown bark, he saw a bright green stem.

"If the plant had a heart, it was still pumping strong," said Ong, inspired to draw an analogy.

"When it comes to the fate of Singapore, the following truth holds:

Covid-19 has "incapacitated one of our lungs, but the Singapore heart - our determination, dynamism and enterprise - is still pumping strong", he added.

"Changi Airport will one day be full again, SIA planes will once again soar.

"This is our collective mission in the coming months and years ahead, as we await the blooming of the bougainvillea once again." - The Jakarta Post/Asia News Network 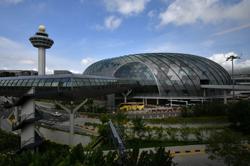 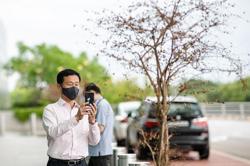 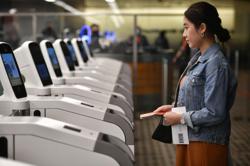