For almost six months, officials here every day announced a fairly astonishing statistic for a nation of 96 million: no Covid-19 deaths. But that changed on July 31, with 10 deaths being reported since.

After no reports of community transmission cases since April 16, an outbreak in the coastal city of Danang turned deadly in late July.

Vietnam’s virus resurgence underscores the difficulties governments face not only in battling waves of the stealthy pathogen but doing so while trying to preserve economic growth.

After officials lifted strict social-distancing lockdowns last spring, people returned to activities such as crowding onto Danang’s beaches, prompting Prime Minister Nguyen Xuan Phuc to scold the country for letting its guard down.

It’s unclear where the latest outbreak originated, though it quickly spread to 12 provinces and cities and infected 333 people.

Vietnam’s tough approach to containing the virus had protected it from the fate of neighbouring countries, such as the Philippines and Indonesia, whose health care systems became overwhelmed as fatalities rapidly rose.

Last month, officials in the Philippines warned hospitals were being swamped by patients as virus cases soared.

Hospital beds were close to 50% capacity, landing in the Health Department’s “warning zone.”

Four major hospitals in the Philippine capital region turned away virus patients after reaching capacity in their Covid-19 wards.

Yet Vietnam’s chronically overcrowded hospitals are at risk if it fails to contain this outbreak, with most of the cases tied to medical facilities in Danang.

Officials in Hanoi are alarmed at the inability of medical units to conduct thorough contact tracing of as many as 94,000 residents who have returned to the nation’s capital from hard-hit Danang.

“The government is aware that the healthcare system is at risk, ” said Le Dang Doanh, a Hanoi-based economist and former government adviser.

“In Danang, doctors and hospital staff have been infected. If medical staff are infected, the pandemic could paralyse the medical system.”

Vietnam, whose tally of 812 coronavirus patients as of yesterday is dramatically lower than in most countries with similar populations, is grappling with the deadly nature of the virus for the first time.

The government has warned that dozens more are now at greater risk of contracting the infection and dying because of existing health problems and advanced age.

This is the scenario Vietnam sought to avoid with drastic policies to contain the virus at the pandemic’s start.

Authorities have issued a stay-at-home order for Danang and three other regions and called for the testing of the coastal city’s 1.1 million residents while Hanoi and Ho Chi Minh City closed bars and suspended large gatherings.

The country’s leaders so far have said they plan to avoid nationwide lockdowns, instead applying them to hot spots. — Bloomberg 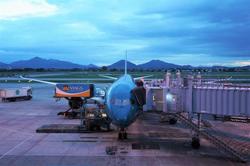 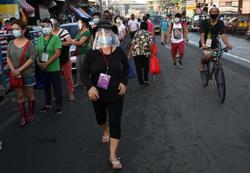 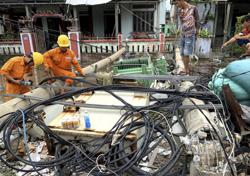