Indonesia allocates US$684mil to lend to regions to boost economy, step up spending

JAKARTA, Aug 8 (The Jakarta Post/ANN): The government is allocating Rp10 trillion (US$684.72 million) this year to provide loans for regional administrations, while taking measures to step up government spending, as it seeks to speed up the recovery of the pandemic-hit economy.

Regional administrations have seen revenues decline by around 28 per cent on average amid the coronavirus pandemic, said the Finance Ministry’s fiscal balance director general Astera Primanto Bhakti, adding that the pandemic had limited the ability of regions to fund priority programs.

“We know that this is a challenge for regions and therefore we’ve introduced this loan scheme to support economic recovery in the regions,” Astera told reporters in a press briefing here.

Government-owned infrastructure financing firm PT Sarana Multi Infrastruktur (SMI) will act as a lender for the regional administrations and will allocate another Rp 5 trillion, thereby increasing the allocated budget to Rp15 trillion this year for the loan scheme.

Last month, the government approved loans for the Jakarta and West Java administrations, the country’s top economic and industrial hubs, respectively, worth Rp 16.5 trillion, for this year and next year, to help revive economic activities.

The country’s gross domestic product (GDP), the broadest measure of goods and services produced, shrunk 5.32 per cent year-on-year (yoy) in the second quarter, the steepest decline since the first quarter of 1999, Statistics Indonesia (BPS) announced on Wednesday.

President Joko “Jokowi” Widodo’s administration has allocated Rp695.2 trillion of the state budget to stimulate the economy and strengthen the country’s pandemic response, but slow disbursement as a result of red tape is expected to delay the impact on the economy.

Government spending, which is expected to anchor the economy and boost people's purchasing power amid cooling private-sector activity, plunged 6.9 percent yoy in the second quarter.

Since the loan approval for the Jakarta and West Java administrations, several other regions namely East Java, Banten and East Nusa Tenggara have also expressed their interest in borrowing from the government, Astera went on to say.

“Banten has agreed on a Rp 4 trillion loan for this year and next year, while other regions are still in the discussion process,” he said. “This will be very important if regions do not have the capacity to implement their programs.”

Meanwhile, Finance Minister Sri Mulyani Indrawati is pledging to spend Rp1.4 quadrillion in the second half of this year to bolster economic growth, as the government promises faster stimulus spending for the remainder of the year.

However, stimulus spending for health care, ministries and regional administrations, as well as corporate financing lagged as the government only disbursed 7.83 per cent of the Rp87.55 budget for health care and 7.9 per cent of the Rp106.1 trillion budget for ministries and regions. The government has yet to disburse any funds for corporate financing.

Sri Mulyani expects the economy to grow at no more than 0.5 per cent, or even contract further in the third quarter, while fourth-quarter GDP growth is projected to be near 3 percent, making for a full-year expansion of zero to 1 per cent.

“We must expedite the process so that spending can increase by the end of the third quarter and can be completed by the fourth quarter,” he said.

On Wednesday, Bank Central Asia (BCA) economist David Sumual told The Jakarta Post that the country’s economic performance would depend heavily on the government spending acceleration. 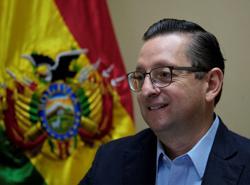