Singapore's economy is set for a strong recovery in 2021.- ST

SINGAPORE (The Straits Times/ANN): Singapore's economy is set for a strong recovery next year after a deeper-than-expected slump amid the coronavirus pandemic, according to a report by the Asean+3 Macroeconomic Research Office (Amro).

The Republic's economic growth will expand by 7 per cent in 2021 after shrinking 6 per cent this year, Amro said in its August update of the Asean+3 Regional Economic Outlook 2020 report released on Thursday (Aug 6).

The gross domestic product growth forecast for 2020 was downgraded from Amro's earlier projection of 0.8 per cent released in March.

Dr Hoe Ee Khor, Amro's chief economist, said Singapore's recovery will start to take shape in the second half of 2020 aided by the manufacturing and financial services sectors that have performed relatively better than other sectors.

As more migrant workers are tested for Covid-19 and cleared for work, the construction sector will also start to contribute to growth in earnest later this year and further boost the recovery in 2021.

"We expect Singapore to bounce back strongly in the second half and into 2021," he said in a virtual media briefing. However, services sectors such as tourism and hospitality will continue to suffer until a vaccine is widely available to allow lifting of curbs on international travel, he noted.

The Ministry of Trade and Industry (MTI) expects Singapore's GDP to shrink by 4 to 7 per cent this year. So far there is no official forecast for 2021.

Across the 14-nation Asean+3 region, Amro expects a U-shaped recovery, led by China. Growth across the region is expected to slow sharply this year to 0.1 per cent, from 4.8 per cent in 2019, before rebounding strongly to 6 per cent in 2021.

Strict containment measures to prevent the virus from spreading caused economies to come to a standstill, leading to massive increases in unemployment, disruptions to businesses, and widespread collapse in domestic demand. Bans on international travel have decimated the region's all-important tourism sector.

Nine of the 14 economies are expected to contract this year, with positive growth rates projected for China, Brunei, Laos, Myanmar, and Vietnam.

Amro's growth trajectory is predicated on the effective containment of Covid-19, both regionally and globally.

The resurgence in infections in some parts of the region and elsewhere has heightened caution about another spate of lockdowns, which the Asean+3 economies can ill afford, even though most still have some fiscal and monetary space to provide support if needed, Amro said.

Dr Li Lian Ong, Amro's acting group head for regional surveillance, said that managing the exit from the raft of pandemic policies will be key to regional financial stability.

"The biggest challenge facing Asean+3 policymakers in the second half of 2020 will be balancing the trade-off between easing restrictions to revive their economies and risking another wave of infections," she said.

Going forward, the manner in which the exit from pandemic policies is managed will be key to ensuring economic and financial stability, according to the report.

Governments would have to withdraw financial support to non-financial corporations and individuals to maintain the soundness of fiscal finance, while balancing against corporate bankruptcies and unemployment.

Similarly, financial regulators must design the exit from regulatory forbearance appropriately, to avoid moral hazards while guarding against any sudden shock to bank balance sheets.

Central banks should terminate their liquidity injections into the financial system to avoid the development of asset bubbles and inflationary pressures while guarding against an excessive tightening of credit conditions, the report added. - The Straits Times/Asia News Network 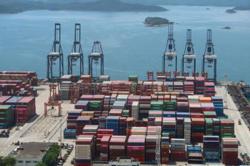