A police report was lodged regarding the gold ornaments that went missing under the custody of Sivashri Kandasamy Senapathi.- HINDU ENDOWMENTS BOARD/FACEBOOK courtesy of The Straits Times/ANN

SINGAPORE, Aug 2 (The Straits Times/ANN): The police are investigating the chief priest of Singapore's oldest Hindu temple, the Sri Mariamman Temple, for an incident involving criminal breach of trust.

In a statement released on Saturday night (Aug 1), the temple said a police report was lodged regarding gold ornaments that went missing in the custody of its chief priest Mr Sivashri Kandasamy Senapathi.

In response to queries from The Straits Times, the police confirmed the report, and said a 36-year-old man was arrested for criminal breach of trust (CBT) as a servant.

The man is currently out on bail.

Gold ornaments which are frequently used for prayers are kept in the custody of the chief priest in the inner sanctum of the temple, and regular audits are done to ensure that the ornaments are physically accounted for, said the temple in the statement.

"During the last audit, it was discovered (that) some gold ornaments were missing. The chief priest was questioned, and he subsequently returned all missing gold ornaments," said the temple.

It added that further checks by the temple committee confirmed that all gold ornaments were fully accounted for and no other person was involved in the incident.

"As it appeared that an offence (had) been committed, a police report was lodged notwithstanding the fact that the temple suffered no loss," said the statement.

When contacted, a temple spokesman confirmed the name of the chief priest, but said it was unable to give more details of the case, such as the dates of the incident and the report, and further details of the offence, as investigations were ongoing.

The Straits Times understands the incident happened on July 29.

The temple committee has kept the Hindu Endowments Board informed of this matter and is working to have closure on this matter, added the statement.

The Sri Mariamman Temple was constructed around 1827 and is one of the main temples for Hindu worshippers in Singapore.

Before the Covid-19 pandemic, it was also a popular tourist spot in Chinatown and is also home to the annual firewalking festival. 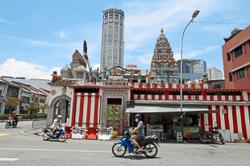