The suspects were caught on July 26 in northwestern Cambodia's Preah Vihear province, the report said.

According to the anti-drug police department, Cambodia nabbed 12,274 drug suspects including 178 foreigners in 14 nationalities during the first seven months of 2020.

Among these new patients, four are Cambodian men, aged between 23 and 30 years old, who arrived in the country on Friday from Pakistan via a connecting flight in Malaysia, the statement said.

They were sent to the Chak Angre Health Centre in southern Phnom Penh for treatment, health ministry's secretary of state and spokeswoman Or Vandine said in the statement.

While another case was an 18-year-old Indonesian man, who arrived in the kingdom on Thursday from Indonesia via a connecting flight in Malaysia, she said, adding that he was also admitted to the Chak Angre Health Center for treatment.

According to Vandine, a total of 236 passengers on both flights have been placed under a 14-day mandatory quarantine at various quarantine centers in Phnom Penh. 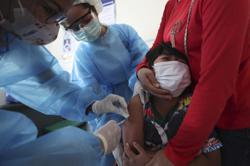