Indian paramilitary soldiers stop a Kashmiri man traveling to visit relatives for Eid during lockdown to curb the spread of coronavirus in in Srinagar, Indian controlled Kashmir, Saturday, Aug. 1, 2020. Eid al-Adha, or the Feast of the Sacrifice, is marked by sacrificing animals to commemorate the prophet Ibrahim's faith in being willing to sacrifice his son. - AP

NEW DELHI, Aug 1 (Bernama): India recorded the highest ever single-day spike of 57,118 of fresh Covid-19 cases on Saturday, taking the total tally to 1,695,988, according to the federal health ministry's latest data.

This is the third consecutive day when fresh Covid-19 cases have increased by more than 50,000, Xinhua News Agency (Xinhua) reported.

The recent spurt in the number of COVID-19 cases is mainly attributed to the increased testing of samples.

According to the Indian Council of Medical Research (ICMR), a total of 1,93,58,659 samples have been tested till July 31, with as many as 5,25,689 samples tested on Friday alone. Efforts are being made to ramp up the daily testing of samples to over one million, said Prime Minister Narendra Modi earlier this week.

The country has entered the "Unlock-3" phase on Saturday with new guidelines issued by the central government to be followed. Schools and educational institutions will continue to remain shut till Aug 31.

Restrictions on movement of individuals during night (or night curfew) have been removed.

The country's Director General of Civil Aviation (DGCA) announced the extension of the ban on international flights till Aug 31. Though, travel will take place under the "travel bubbles" for some countries including Germany, the United States, and France.

Meanwhile, AFP reported that nine people have died in india from drinking alcohol-based hand sanitiser after liquor shops in their town were closed due to virus restrictions, police said on Friday (July 31).

They were rushed to hospital but declared dead on arrival, he said.

The group turned to hand sanitiser "as a substitute" for liquor after supplies were cut off when authorities ordered a lockdown of the town to combat the coronavirus, he added.

An investigation into the nine deaths has been launched, he said.

Hundreds of poor people die every year in india due to alcohol poisoning, mostly from consuming cheap hooch.

Bootleggers often add methanol -- a highly toxic form of alcohol sometimes used as an anti-freeze or fuel -- to their home-brew liquor to increase the alcoholic content.

The deaths in Kurichedu occurred shortly before india's coronavirus death toll passed 35,000 on Friday, overtaking that of Italy.

Total infections in the world's second-most populous country is now surpassed only by the US and Brazil, both of which have much smaller populations. Comment: Time for China to toughen up on “insincere” India 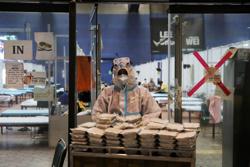