Police showing the media the seized items from the suspects. - The Borneo Bulletin/ANN

BANDAR SERI BEGAWAN, Aug 1 (Borneo Bulletin/ANN): A husband and a wife allegedly involved in drug activities were arrested by Narcotics Control Bureau (NCB) personnel at a parking lot near a fast food restaurant in Gadong on July 21.

The suspects, permanent residents aged 30 and 35 have previous convictions under the Misuse of Drugs Act, Chapter 27.

Several plastic packages containing crystallised substances believed to be Ketamine, a Class B controlled drug weighing over 20 grammes with an estimated value of more than BND1,200 were seized, an NCB release stated.

The case is under investigation under various sections of the Misuse of Drugs Acts (MDA).

One suspect is being investigated under Section 7 of MDA, Chapter 27 for the possession of utensils used for drug consumption. This carries a penalty of up to three years’ imprisonment or a fine of BND10,000 or both.

One suspect is being investigated under Section 3 of the Criminal Asset Recovery Order, 2012 for money laundering offences.

NCB reminded the public that money laundering from proceeds of drug trafficking is an offence under the Criminal Assets Recovery Order, 2012.

Information on drug abuse activities can be relayed to 2448877, hotline 8777444 (after working hours) or email to ncb@narcotics.gov.bn. - Borneo Bulletin/Asian News Network 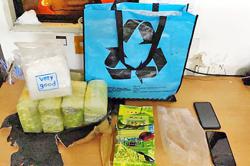