Residents wait to be tested at a makeshift rapid testing centre in Hanoi, on July 31, 2020.- AFP

BANGKOK (The Straits Times/ANN): Faced with its single biggest daily increase in coronavirus infections, Vietnam has swung into full battle mode, shutting bars and suspending events in its biggest cities while trying to contain the situation in Danang, the epicentre of the latest outbreak.

The coastal tourism hub logged 45 new Covid-19 infections on Friday morning (July 31)among individuals who had been isolated since new community transmissions were first detected over the weekend.

Before this outbreak, Vietnam had not reported any local transmission for close to 100 days and appeared to have emerged from the pandemic ahead of its South-east Asia peers, achieved through a system of mass quarantine and testing.

With its borders closed to almost all foreigners since March, locals had lowered their guard about wearing masks and social distancing in public.

Many also holidayed around the country on discounted airfares and hotel rates offered by businesses trying to restart the pandemic battered tourism industry.

Danang is now in the middle of a 15-day lockdown, with even takeaway food and drink services suspended.

According to local media reports, all construction work in Danang has been halted with effect from Friday, although the authorities are erecting a field hospital in a stadium.

"There have been many days of community transmission, the source of which has not been identified," he wrote.

In the nearby tourist haunt of Hoi An, in Quang Nam province, a similar stay-home order is also in effect.

In the southern metropolis of Ho Chi Minh City, nightlife will essentially come to a halt from Friday with the closure of bars and clubs, and the suspension of festivals, fairs and non-urgent meetings.

Public gatherings of more than 30 people are banned, mirroring similar restrictions placed in the capital Hanoi earlier this week.

While the vast majority of infections detected since Saturday (July 25) were from Danang, at least one case was logged in Hanoi and two in Ho Chi Minh City.

There is much concern over the estimated 80,000 tourists who were evacuated from Danang over the weekend, with the majority from Hanoi or Ho Chi Minh City.

Despite the latest setback, Vietnam's economy is poised to grow at around 2.8 per cent for the year if the world situation improves, said the World Bank on Thursday. A less favourable external environment will still see it eke out a 1.5 per cent growth. 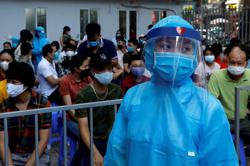