US diplomat tests positive for Covid-19 in Cambodia

PHNOM PENH (Xinhua): Cambodia confirmed Thursday (July 30) that a US diplomat was tested positive for Covid-19, raising the total number of infections in the kingdom to 234, said a Health Ministry's statement.

The statement described the man as a senior diplomat who had travelled from the United States to Cambodia recently.

"On the 13th day of his quarantine, his samples were tested for the Covid-19 for the second time, and the result released on Wednesday showed that he was positive for the virus," it said.

"The patient has been placed in an isolation ward at the US embassy in Phnom Penh, receiving treatment from the US doctors to the embassy," it added.

Meanwhile, the statement said one of the two senior diplomats, who tested positive for the virus on July 16, had recovered after the last two tests turned out to be negative.

The Southeast Asian country has so far recorded a total of 234 confirmed Covid-19 cases, with 162 patients cured and 72 still in hospital. 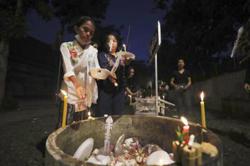