BANGKOK, July 27 (The Nation/ANN) - The State Railway of Thailand has hired a consultant to conduct a feasibility study on the plan to build Phase 2 of the high-speed rail system linking three international airports, said SRT Special Project chief and construction engineer Sucheep Sooksawang.

Phase 2 covers the 190-kilometre Rayong-Chantaburi-Trat extension, he said, after a market-sounding event for the project on Friday. Representatives from around 200 local and foreign private companies attended the event.

The study will be completed next month and submitted to the Cabinet next year. The SRT will then draw up a public-private investment plan in 2022 before calling for constructors’ bids in 2024.

The SRT has three options for investment.

Under the first, a private company would invest in the construction, train system, trains, operation and maintenance, while the SRT would allocate land plots.

Under the second, a private company would invest in the train system, trains, operation and maintenance, while the SRT allocates land and takes care of construction.

Under the third option, a private company would be responsible for operation and maintenance, with the SRT taking care of the rest.

The project is reportedly expected to cost Bt101.7 billion. 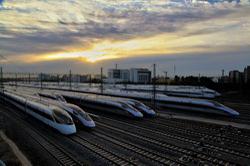