Chikungunya is an alphavirus transmitted to humans through the bite of infected Aedes mosquitoes. - AFP

PHNOM PENH (Xinhua): Cambodia on Thursday (July 23) confirmed the reemergence of Chikungunya virus (CHIKV) in northwestern Banteay Meanchey province after dozens have fallen ill, said a statement from the Ministry of Health.

Residents in six villages in Poipet commune of Poipet city had become sick from July 19 to 22, with the symptoms of fever (38 degrees Celsius), joint pain and rash, the statement said, adding that the blood specimen and samples of 104 patients had been tested for CHIKV, measles, rubella, and Covid-19.

"Those blood specimen and samples had been sent to the Pasteur Institute of Cambodia for lab tests, and preliminary results available Wednesday night showed that they had CHIKV," it said.

Currently, those patients have been recovering at the Poipet referral hospital, it added.

CHIKV is an alphavirus transmitted to humans through the bite of infected Aedes mosquitoes, the statement said, adding that its symptoms include acute fever for three to four days, joint pain, muscle pain, headache, vomit, fatigue and rash.

"Usually, CHIKV is not fatal and most of the patients will recover within a week... but patients can die if they simultaneously have other diseases such as malaria, dengue fever and meningitis," it said.

Cambodian Minister of Health Mam Bunheng said that to prevent themselves from CHIKV, people should avoid being bitten by an Aedes mosquito by sleeping under mosquito nets and wearing long sleeves and full-length trousers or skirts.

"If someone has the above-mentioned symptoms, he/she should visit the nearest health center or hospital for consultation and treatment," he said in the statement. 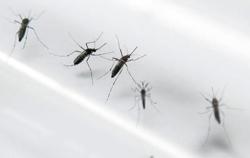